Niksun: Pioneering the Future of Network Security and Monitoring 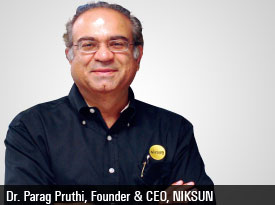 In 2005, the United States Secret Service (USSS) was overwhelmed by an international group of cyber criminals who had created a stir in the banking fraternity by hacking into databases and stealing close to 1.7 million credit card numbers. Millions were lost and the potential threat was estimated to amount close to billions. W. Ralph Basham, the Director of the USSS in 2005, got word of a company that was engaging in network monitoring solutions to secure critical infrastructure. After a meeting behind closed doors, Dr. Parag Pruthi, Founder & CEO of NIKSUN, was entrusted with building a solution to tackle these infringements. Dr.Pruthi and his group of engineers were able to design and deliver a product to the USSS with the technology to lawfully intercept and analyze large amounts of data streaming through networks. "Through his efforts we were able to take down an international organization that consisted of over 28 different entities in six different countries around the world. It literally saved billions of dollars in losses around the world," explains commissioner Basham on the effectiveness of NIKSUN’s prototype for the government. After many commitments, hindrances and hours spent in R&D, NIKSUN finally plans to release its network core 10000 series platform, a hardware that traces its roots to the one designed by the team for USSS in Operation Firewall in 2005.

After having successfully worked with the USSS and having delivered several cyber security defense projects for various enterprise customers, Dr Pruthi realized the grave requirement of the ability to inspect unspecified content in real time. However, having given word to the Secret Service to not make the technology public as it would jeopardize the case on the cyber infringements, Dr. Pruthi decided to postpone R&D on the game changing product. Two years later, the R&D development began, but the electrical work due to a new tenant in the building complex in 2008, led to a massive fire breakout within NIKSUN’s headquarters, destroying over 250 servers along with its data. Adding fuel to the fire was the fact that the period was a time when the industry was reeling under recession. For any other organization, the situation would have been the end of the road, but for Dr.Pruthi, it was a new beginning to let go of legacy systems and build a new cutting edge infrastructure from scratch! “So my three million dollars of investment on this technology turned to smoke one day, determined to redesign and develop the product again, we began our second innings in 2009-10 and resurrected this project,” says Dr. Pruthi. The 10330 platform finally started to take shape in 2011 and a new advanced prototype was built in 2012. In 2013 the prototype was given to a client. The model was very well received by the customer and a large order for the network monitoring appliance was placed. After huge successes in the testing phase, now NIKSUN is set to release its avant garde network monitoring platform to the enterprises in the form of Supreme Eagle, hence opening a new era in cyber security and network management.

Cyber crimes have superseded terrorism as the number one threat, according to the U.S. national intelligence bureau. “Cybercrime creates a $100 billion annual loss to the U.S. economy and as many as 508,000 lost jobs as a result,” states another research conducted by the Center for Strategic and International Studies (CSIS). The figures highlight the inexorable link between cyber crimes, the common man and the enterprise. In light of these startling figures, the enterprise community owes a lot to companies like NIKSUN, that have constantly strived to help organizations realize the weight of the threat at hand by providing cutting edge network performance solutions. Under the leadership of Dr.Pruthi, the father of Data Capture, Niksun has been delivering seamless network monitoring products and services to a host of enterprises for the better part of its 18 years in existence. Today, financial companies such as banks, investment companies, insurance, and mortgage rely heavily on broadband networks not only for internal communications and daily business activities, but also as a gateway for customers to initiate financial transactions. Bandwidth is managed efficiently to maximize the return on investment and provide the experience that today’s customers expect. Having seen the industry transverse from gigabytes to terabytes and to now complying with petabytes of data, Dr. Pruthi has strived to position the company strategically to be one step ahead of cyber criminals. Today the security provider enables over 1000 customers across 31 countries to seamlessly monitor data in the network. “We are the only company that can provide a network monitoring solution that simultaneously captures, inspects, mines, correlates, and stores data traversing the network at multi-gigabit rates,” says a proud Pruthi. In the wake of the rising dependency on the broadband, NIKSUN has gone the extra mile to build a single console that is capable of providing 93 percent analysis and visibility across networks.

But what most enterprises do not realize is the need for network monitoring. The bigger problem than the cyber threat itself is the fact that enterprises are blind to their high level of vulnerability. Although the U.S. government is trying hard to educate corporate houses and make them acknowledge the existence of a problem and take proactive steps, enterprises are still unwilling to understand the gravity of the situation. The dependence of individuals on internet transactions and online banking for over a decade has only aggravated the peril. Also understanding that SME’s struggle to align financial constraints with security and performance, NIKSUN continuously focuses its innovation on developing both security and performance issues using the same infrastructure for security.

Mining and Organizing Data in a Unique Methodology

During an infrastructural security breach or a performance issue, the speed and reliability of reconstructing and analyzing data in the context of the investigation is paramount to quick recovery. NIKSUN tries to solve the challenge of data reconstruction and analytics with two basic approaches, firstly by leveraging NIKSUN’s Knowledge Warehouse (NKW), a patented technology used to generate multi-timescale linked and aggregated information from fine grained data to enable a single source of truth. Secondly, by decoupling the data from the analytics using service oriented architecture.

“This fundamental design allows us to not only pre process and organize data for fast retrieval, but also gives security and performance analysts the ability to visualize the information in their own unique way. In addition, the powerful query language integrated with the NKW allows users to easily mine data,” points out Dr. Pruthi.

Moving forward, NIKSUN is geared up to run the most compute intensive application in real time in the best way possible to suit the needs of enterprises. “The next step is about solving how to take this intelligence and do epic control. So in the next 4 or 5 years, my work is going to shift towards control systems,” says Dr. Pruthi. In the realm of networking, NIKSUN hopes to re-configure services in the cloud which can be done easily with the availability of networking tools in real time, hence helping in higher efficiency. “By efficiency, I mean that we would be able to reduce one-tenth or one-hundredth of the cost that is currently being incurred and that is the Game Changer,” adds Dr. Pruthi. The basic reason behind security issues in enterprises is the lack of computing capabilities to analyze each and every situation and make a decision; NIKSUN precisely works on this aspect, to place algorithms which can be put into play where work can be done on the production network rates. In addition to short term roadmaps such as analyzing data from hundreds of devices without degrading execution time and researches on a 400 GB machine, Dr. Pruthi looks forward to a better control mechanism in the long run. To finalize the roadmap, the data proliferation vigilante looks set to make giant strides with respect to speed, processing rate and help enterprises “know the unknown” and ultimately increase performance and security.

Taking the Fight to Cyber Criminals

NIKSUN’s next generation platform for better performance and highly scalable network monitoring, The Supreme Eagle, has been built with features that include a mind boggling RAM of 3 terabytes and storage that runs in terabytes. Some of its highlights include enabling seamless high fidelity data capture of speeds up to 100G. The scalable analytics, supports the addition of processing units (NetVCR’s/NetDetectors/NetVoice, etc units) as needed hence enabling scaling on demand, cost effectively and effortlessly. For startups and mid-sized companies, who expect a lot of expansion, the Supreme Eagle platform allows for units to be added in tandem with the growth in network capacity, without incurring the cost of decommissioning or replacing current hardware to support expansion. The scalable storage has set a new standard in flexible, high-performance expansion with storages scaling to petabytes.

With network link speeds seeing a meteoric rise from 10, 40 to now hitting the 100GbE mark; network environments have become more demanding and less transparent. The modular architecture of the NIKSUN10000 series has been designed to meet and capture the monitoring needs of the most demanding network environments such as datacenters, telecommunications, and cloud service providers. For the safety of its consumers, the NIKSUN R&D team has built-in a Remote Console Management module that is capable of delivering secure remote BIOS level access and power management, while the fault management module takes care of effectively monitoring system health. For ease of access, the plug and play devices have been easily deployed and configured with minimal training. With most data centers today worried about the long term investment aspects of a network security solution, the company has placed the icing on the cake by getting rid of the need to “rip and replace” the product every 2-4 years, hence future proofing the client’s investments.

When the Internet of Things met Analytics

Is Secure Access Service Edge(SASE) Part Of Your It Road-Map?

Archie Jackson, Senior Director and Head of IT & IS, Incedo Inc

How The Travel & Accommodation Industry Benefits From Cloud Computing