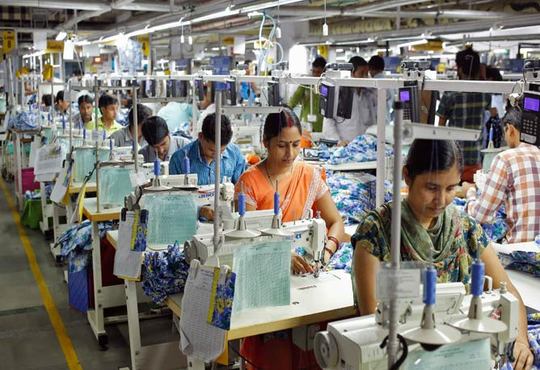 At a time when nearly one million people are expected to enter the workforce every month for the next three decades, export-oriented apparel production in India and other South Asian countries has the potential to create more and better jobs, says a new World Bank report.

The Stitches to Riches? Apparel Employment, Trade and Economic Development,launched in New Delhi today is aimed at demystifying the global and South Asian apparel markets, estimating the potential gains in exports and jobs, and identifying policies that can unleash South Asia’s export and job potential compared with those of their closest competitors in the Southeast Asia region (Vietnam, Cambodia, and Indonesia).

As wages increase, China, the largest apparel manufacturer for the last 10 years, is expected to slowly relinquish its lead position in the global apparel market, opening the door to other competitors. This could be a huge opportunity for India and other South Asian countries. Even a 10 percent increase in Chinese apparel prices could create at least 1.2 million new jobs in the Indian apparel industry, the report estimates.

Women are expected to benefit the most as their share in the total apparel employment is much higher than their share in other industries. A one percent increase in expected wages in the textiles and apparel industry could raise the probability of women entering the labor force by 18.9 percent, says the report.

“Apparel manufacturing not only has a huge potential for creating jobs, particularly for the poor but also has a unique ability to attract female workers. Employed women are more likely to create positive social impacts as they tend to spend their income on the health and education of children,” said Onno Ruhl, World Bank Country Director, India. “Rising costs of apparel manufacturing in China provides a window of opportunity for India to focus on apparel in productively employing its huge working-age population.”

The top four apparel producers in South Asia – Bangladesh, India, Pakistan, and Sri Lanka – have made big investments in world apparel trade and account for 12 percent of global apparel exports. India also has a more diversified export structure and has a well-developed fiber (cotton), textile and apparel manufacturing base.

Though India is gaining market share, Southeast Asian countries (Cambodia, Indonesia, and Vietnam) are outperforming all South Asian countries in overall apparel export performance, product diversity, and other non-cost related factors. For it to take advantage, India needs to move quickly to ease barriers to the import of manmade fibers, facilitate market access and encourage foreign investment to reach more end markets, which would also yield dividends for other light manufacturers like footwear and toy, the new World Bank report Stitches to Riches suggests.

“South Asia has taken many steps in recent years to support the textile and apparel sector, but it now needs to step up its game by tackling inefficiencies that are undercutting its competitiveness. Greater access to manmade fiber and integration between textile and apparel among other measures can help Indian companies take advantage of the emerging global opportunities and encourage good jobs for development,” said Gladys C. Lopez-Acevedo, one of the authors of the report and a Lead Economist for the World Bank.

Technology to Drive Point of Sale Distribution of Insurance

Data Center is Imperative for the Growth of the Education Sector

CIOs must step into the Domain of Business Transformational Leadership