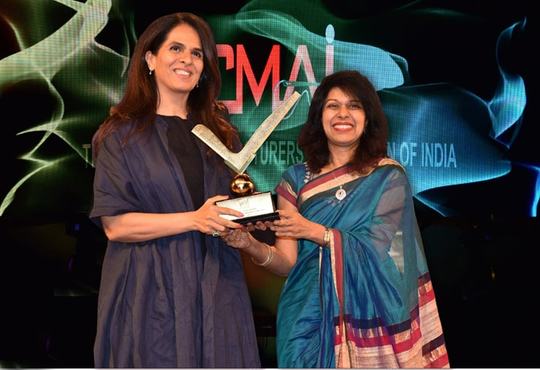 Mrs. Meena Bindra, the founder and chairperson of BIBA was conferred with the APEX Lifetime Achievement Award, the prestigious award of the Indian apparel industry given by the CMAI, []Clothing Manufacturers’ Association of India] at a function held in Mumbai on October 28, 2015. This Lifetime Achievement Award is an acknowledgement of Mrs. Bindra’s invaluable contribution to BIBA as well as the country’s ethnic apparel industry. In addition to the aforementioned honour, BIBA was awarded the ‘best ethnic wear’ brand for women.

With this award, BIBA reached another significant milestone in the journey of its success. BIBA, as an idea, was born in 1983 when Mrs. Meena Bindra, a homemaker and a mother of two, embarked on a creative venture from her home in Delhi. Mrs. Bindra not only pioneered the trend of selling readymade salwar kameez sets at a time when they were almost unheard of, she also explored ethnic Indian prints, fabrics, and designs and popularised them through her creations. The instant success of her enterprise proved Mrs. Bindra’s fashion acumen. As a label, BIBA was launched in 1988 when Mumbai’s premier fashion store Benzer was stocking Indian women’s wear and gave Mrs. Bindra her first big, commercial order. Subsequently, the company launched its first exclusive store at Mumbai’s Inorbit Mall in the early nineties.

Even today, the Delhi-bred septuagenarian continues to be actively involved in crafting every contemporary BIBA design. She says, ‘Very much like 32 years ago, I still find the whole process of creating an outfit absolutely thrilling. Despite having a team of two dozen designers now, I personally check the final product for femininity, grace, and glamour.  We are a very hands-on company and I feel that BIBA’s reasons for success lie in the quality, affordability, and sheer elegance of its products.’

BIBA Apparels Private Ltd., a leading name in the Indian fashion industry, has a pan-India presence across 76 cities with 192 exclusive brand outlets and over 250 multi-brand outlets. It also has its own e-commerce portal biba.in which has made the brand accessible to people even in remote corners of the country. It is estimated that the annual turnover of BIBA apparels is Rs.600 crores today. BIBA pioneered Bollywood merchandising in India in 2004 with Na Tum Jano Na Hum and also provided costumes for blockbusters such as Hulchul, and Baghban. Other than having bagged the CMAI APEX Awards in October 2015, BIBA also won accolades at the prestigious images award in 2012 for the most admired women's Indian wear brand of the year.

How to derive Business value out of Business Intelligence?

IoT in Logistics: A Necessity

Navigating Constant Change: A CIO's Rules of the Road