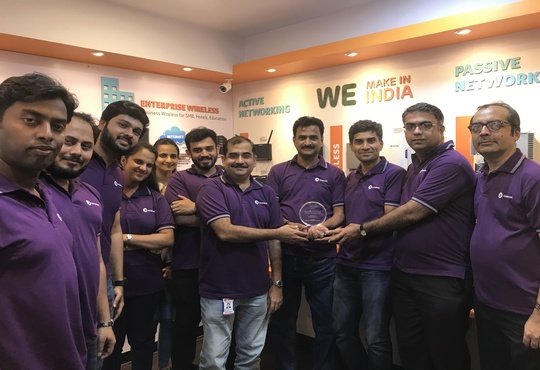 DIGISOL Systems Ltd., (100% Subsidiary of Smartlink Network Systems Ltd.) a leading provider of Active and Passive Networking products, announced today that it has been awarded "Best Make In India Wi-Fi Company" at "My India Wi-Fi India Summit & Awards 2017". The event was organised by leading digital media organisation DigiAnalysys in New Delhi with the active support and cooperation from leading players in the telecom industry. Awards were given in about 20 different categories.

While commenting on the award, Ms. Arati Naik, COO, DIGISOL Systems Ltd. said, “We are one of the few companies who want to spearhead the government’s Make in India initiative. We have been in the manufacturing sector for the last 25 years and have always contributed positively to the Indian economy by locally manufacturing products.”

DigiAnalysys has honored all Wi-Fi stakeholders who are playing a significant role in transforming India into a digitally empowered nation. The focus was to felicitate unsung heroes and champions who are harnessing the power of Wi-Fi through innovation by transforming business processes, improving delivery of public services and creating a positive impact on corporates and society by Connecting the Unconnected.

DIGISOL is the only vendor who manufactures IT networking products in India and is very proud of it. When local manufacturing was a difficult option, its Chairman, Mr. K.R. Naik started manufacturing in India. Since DIGISOL manufactures in India, it is able to customize its products as per Indian conditions and customers’ requirements. DIGISOL is trying to Indianize the product so that the product is by India, for India. DIGISOL does 100% testing of it's products, which very few brands believe in and therefore, the failure rate is lowest among the networking vendors.

Speaking about the My India Wi-Fi India Summit & Awards 2017, Pravin Prashant, Editor, DigiAnalysys said, "The focus was on Connecting the Unconnected and companies were evaluated on the basis of initiatives undertaken, technology, execution, creativity and innovation, and overall impact with respect to corporates and communities."

IT Security Landscape - Then and Now

Big Data Retires Your Data Storage Infrastructure... So Now What?

BI Gives a Competitive Edge to the CIOs/Head-IT

Cloud Vs Onpremise: a Comparison & Why Cloud May Be Better Than on-premises

Digital Marketing - Market To Those Who Matter

The Darker Side of Open Source Applications