Dukaan, a Leader in E-Commerce Enablement Space, to Hire 100 Engineers 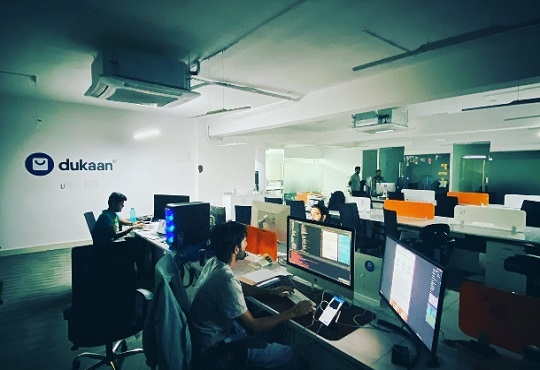 Dukaan, a leading SaaS platform that enables merchants with zero programming skills to set up their e-commerce store, today announced that it will hire over 100 engineers for various roles for its Bengaluru office. With this move, the company will be able to strengthen its core engineering team to over 150 members.

'Dukaan-tech', which started as a weekend hackathon project running on a single EC2 instance 6 months ago, has quickly turned into a gigantic platform powered by 6 TB RAM, 1200 core kubernetes cluster.

The react frontend has become a massively complex system handling dozens of themes and plugins which can add/remove new themes or plugins in real time without even a restart, serving about 5 million page views a day.

The simple django backend has expanded into dozens of micro-services processing over 100M requests a day and are still debating how many is too many. Each of them comes with their own complexity.

The android app, downloaded over 6 million times already, is now a magical piece of java codebase which can somehow adapt to a user's behaviour and show/hide features based on where the seller is creating an online store adventure.

On top of that, the CEO decided to give every seller their own android app, by far one of the most loved features. So Dukaan now has over 3 million different android APKs floating and being shared on whatsapp which are generated, maintained and updated, by Dukaan experts, without the playstore.

The company recently launched 2 iOS apps, one for the sellers and another for buyers (Dukaan finder) and do constant updates and feature releases.

Using Dukaan's android, iOS and web platforms, sellers have added over 15 million products so far resulting in over 50 million product images and meta-data, the complex data pipelines feed those into sophisticated computer vision algorithms using which one will be able to magically detect and upload an entire catalog just from a photo of the store shelf, suggest relevant images of the products as soon as one types the product name and detect objectionable products/content on the platform in real time.

All these systems generate over 50M events a day that are stored and processed for data analytics and prevent fraud.

The newly launched social commerce platform 'Dukaan Plus' is a very complex system integrating half a dozen third party services under one integrated platform to make buying and (re)selling easy for everyone. The home screen feed itself is going to be fully personalized, adapted to a reseller's behavior to suggest the most relevant product for one to resell rather than finding and being overwhelmed within a catalogue of millions of products.

Dukaan did this with a team of just 12 ninjas (engineers), giving their best every second to make sure that every day over 5 million neighbourhood dukaans can reach their customers, right in their hands - quickly and safely and are able to deliver a great shopping experience which is on par with the mazor online retailers, globally.

This is already very overwhelming and have just got started, the product roadmap is solid, the adoptions are through the roof and need more hands on deck to continue shipping and delivering a product which is already miles ahead from competition in every single way.

"In coming years, over 50 million neighbourhood dukaandars will be taking their dukaans directly to customers with no physical boundaries and we are looking for talented ninjas to help build the infrastructure, frontends, backends and the beautiful industry defining mobile apps.

We have already invested a lot in cutting edge AI and ML technology to simplify every step of the seller experience,  From being able to magically upload the entire catalogue of a grocery store just by taking a photo of his store to processing thousands of online payment settlements in real-time.

We want to take that same magical experience to the next level by simplifying and redefining growth, Logistics and working capital requirements for the 1st time internet entrepreneurs," said Subhash Choudhary, Co-founder and Chief Technology Officer, Dukaan.

Dukaan recently launched Dukaan Plus, a social commerce platform to bring together manufactures, vendors, resellers and customers onto a single platform, where the reseller receives commissions for their sales. The price of the products is regulated by Dukaan to ensure each product is priced appropriately. Since the launch, Dukaan Plus has over 10K registered users inclusive of vendors and resellers.

Embracing the Internet of Things - What's in store for enterprises?

How IT Can Liberate AI and Empower the Organization

Future-proof Your Organization with Low Code