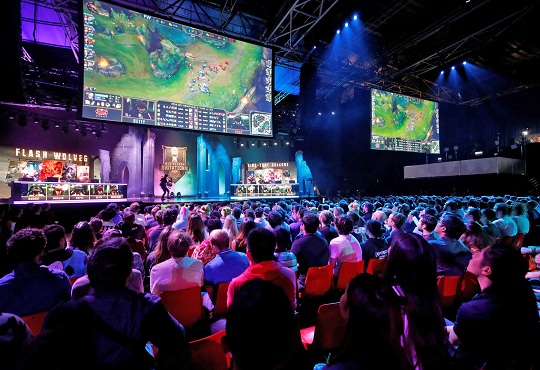 Although esports has been on the rise in the past decade, it is clearly seen that it is increasing multifold in the lockdown. The gaming industry has grown a great deal and is seen doing many social activities such as charitable pledges worth millions of dollars, the donation of surplus computational power to help researchers better understand the coronavirus, and solidarity response funds to help medical workers, children at risk and employees who have been adversely affected.

Analysis from GamesIndustry.biz shows that sales across 50 key markets rose by 63%. Even games released during the pandemic are performing well, with titles as varied as Doom Eternal (a first-person shooter) and Animal Crossing (a world-building simulation) both breaking sales records after launching. This is reflective of data from Comcast that shows how new game downloads have increased by 80 per cent.

Looking at downloads and sales in isolation does not paint a complete picture, since many games are now available for free (and then monetize in-game). But other metrics for engagement tell the same story. Verizon has reported an increase in gaming traffic during peak hours of 75 per cent, compared to increases of 12 per cent increase in digital video traffic and 20 per cent in web traffic. Meanwhile, data from Streamlabs shows that platforms like Twitch, YouTube Gaming, and Facebook Gaming have also experienced a surge in growth, with around 20 per cent increase in usage hours reported across services.

“Unique to gaming is that it has both interactive and linear consumption models, and the activity of watching gaming video streams and video on-demand has become nearly as big as gaming itself,” says Mike Sepso, co-founder and CEO of Vindex. “In the COVID-19 era, all of this activity has increased dramatically because of both the new time available to people and their need for social interaction, which gaming provides.”

Having said that, gaming is not immune to the coronavirus. Esports, with its reliance on live events, has been one of the first parts of the industry to be affected. Most esports events have been cancelled or postponed, though some are taking place without audiences.

“We have directors, producers, broadcast engineers and professional gamers all working remotely to recreate the excitement and quality of a live event,” says Sepso. “Esports has been able to continue while traditional sport has not because the playing field is virtual and can be replicated online; however, nothing can truly replace the social richness of the live experience.”

Mobile E-sports are already subverting expectations in the once-PC-dominated esports market. Even towards the end of last year, games like PUBG Mobile and Garena Free Fire began to generate higher peak esports viewer counts than PC titles like CS:GO and Dota 2. With the PUBG Mobile game coming back to India under a different name after its recent ban, the Mobile E-sports is expected grow to multifold.

The bulk of eSports revenue comes from sponsorships and advertising. As the industry continues to grow, awareness has prompted investment from some of the major spenders in advertising. Gamers typically represent a valuable market for brands. With the audience both highly engaged and accounting for a large majority of the industry’s audience, the ROI for brands is considerable, relative for example to a social campaign.

Sponsorship and advertising can be via typical digital routes such as pre-roll on a live stream, branded highlights on social media or a partnership with the game, or the console itself. There are also subtle in-game promotions. For example, on a football game, you could brand the advertising boards that surround the pitch, statistics, or player of the match awards. The selling of these rights allows the games to reinvest in the product, creating a high-quality user experience. In turn, the viewer experience is better, attracting more people to watch and engage.

Younger audiences are continuing to move away from traditional TV and towards curated viewing experiences on streaming platforms like Twitch. Many conventional players in the entertainment sector have been slow to adapt to these formats that appeal to younger people, leading younger viewers to consume content elsewhere.

To that end, Twitch and YouTube have flourished into important platforms for non-gaming content. In 2020, we already saw in-person event cancellations forcing many brands to look for alternative and innovative ways to engage with their younger audiences.

While Twitch began with gaming, non-gaming content is growing on the platform. In fact, the “Just Chatting” category is now one of the most popular, and lockdown measures led to concerts, political events, and live shows all being hosted on the platform.

When creating tournaments, organizers often assign an entrance fee, helping to form the prize fund which is ultimately distributed amongst the tournament’s winners. However, outside of major tournaments in which a majority of players are unable to take part in, the distribution of prize pools is largely unregulated. Players often don’t see the promised winnings or are not paid at all. In addition, there are cases when the player plays worse than the rest of the team and, contrary to the agreement, the team deprives him of any compensation.

This particular issue may be solved by blockchain technology via the use of smart contracts –which would advocate all the conditions for the distribution of prizes. Smart contracts ensure the transparency and execution of the terms of transactions, by automatically distributing prizes as per the agreed conditions, which are available to all participants and cannot be changed or altered by a single user or party. The contract code sets out key performance indicators for each player. After the completion of a game or tournament, these figures are automatically compared to the real indicators and, as a result of this comparison, the distribution of the winnings occurs. If the indicators lag behind, the reward is automatically cut; if the indicators don’t lag, then the remuneration is calculated in full. Thus, the agreement in such a contract cannot be violated.

These problems, as well as many others, may be solved through the implementation of blockchain technology – a technology which has found applications in a variety of other areas and is now expected to bring its benefits to esports gaming.

With continual innovation and growth, the possibilities for eSports are endless. There is no doubt that local lockdowns across the world increased the awareness of esports but year on year growth was already happening. Adapting quickly and sustaining growth through turbulent times, whether or not people are at home has been crucial to recent months. Inevitably, at some point, there will be saturation but there are no signs of this occurring in the near future.

The Path To Managing Data As An Asset

Mobile Architecture: Housing Security as a Foundation Component to Design and Deploy Mobile...

Mobile Architecture : Housing Security as a Foundation Component to Design and Deploy Mobile...