Flock, the communication and collaboration platform for modern teams, today announced the launch of three new powerful features that will help its users work smarter and faster together - Smart Channels, Guest Accounts, and Audio Conferencing via Bridge. With Smart Channels, Flock has become the world’s first team messenger to automate channel creation and management on the basis of custom fields, simplifying team collaboration for both Flock admins and members. 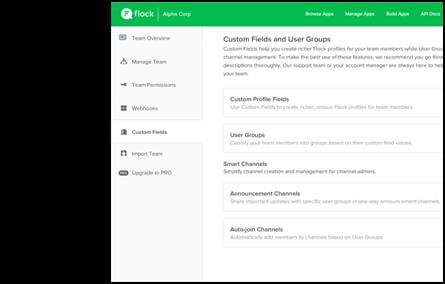 While earlier, admins had to manually add team members to new and existing channels one-by-one, with the exception of auto-join channels, Smart Channels changes the way admins can manage their teams and channels on Flock. Users can now automatically be organized into specific groups and added to select channels, such as an announcement or auto-join channels, without waiting for an invite. Simply put, new employees and group members can jump start team conversations and collaboration without wasting any time. This is especially important considering that the time spent by the average employee in collaborating has increased by 50% over the last two decades, according to 2016 Harvard Business Review study.

Smart Channels is powered by Flock’s custom fields feature, which admins can activate by going to the Admin panel. When users sign in to Flock for the first time, they will be prompted to fill in the custom fields (such as location, department, or reporting manager) specified by their admin. Admins can then automatically organize their teammates into user groups and add them to channels. In addition, users can also create more rich profiles for themselves, making it easier for others to connect and collaborate with them.

Additionally, with Guest Accounts, Flock users can invite those who don’t belong to their organization, such as vendors, customers or agencies, to work with them - without giving them access to their entire Flock universe. They can do this by specifying the channels and users their guests can access or start conversations with. 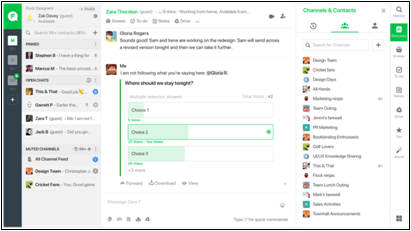 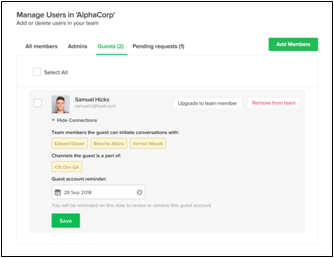 Further, Flock users can also get on audio calls and conferences instantly via Bridge. Users can invite up to ten participants (including themselves) and chat for 90 minutes uninterrupted. With this feature, users can connect with each other irrespective of their location, making it great for remote teams. It also works well in instances where users have limited internet bandwidth, and no access to laptops or other gadgets as Bridge works perfectly on mobile and fixed line phones.

“Flock is a fast developing, intuitive product with a customer-centric development approach. We strive to bring even the most complicated technology to our users in the simplest form, so that everyone ranging from developers to HR and finance teams can benefit from it,” said Bhavin Turakhia, CEO and Founder, Flock. Commenting on the new features, he added, “We all know that workplaces are increasingly moving away from the culture of working in silos to becoming places where people can connect and collaborate with each other instantly. These new features are aimed at helping our users eliminate unproductive tasks from the their work lives and making communication and collaboration more efficient and productive.”

● Better channel management – Users can easily see and join those channels that match their custom profile values, thanks to the Flock algorithm. This also frees channel admins from the manual process of adding users to channels, giving them more time to focus on strategic business objectives.

● Enhanced transparency – Announcements reach each team member instantly, ensuring that no employee is left in the dark, thus creating a culture of transparency across the organization.

An Exploration into OpenStack Technology

Information Security: Your People, Your First Line of Defense

Information Security awareness for Employees: Not a choice anymore, its mandatory now!

Monetization of The Internet Of Things - Extracting Value from Connectivity