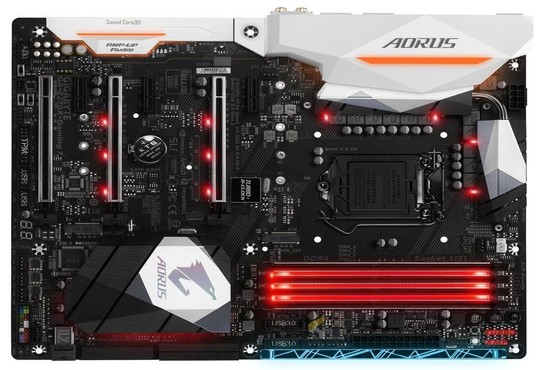 GIGABYTE TECHNOLOGY Co. Ltd, a leading manufacturer of motherboards and graphics cards, is proud to announce its new AORUS Gaming line of Motherboards which support Intel’s® 7th/ 6th Gen Core processors. These motherboards, designed for enthusiasts allow for customization and personalization through unique features such as liquid cooling support, fully customizable RGB LEDs as well as a new and improved smart fan controls which are all meticulously incorporated into this platform to give gamers more control as well as the ability for them to express themselves.

For the past few years, gamers have been focused on the customization of their PC; AORUS Gaming Motherboards embodies that idea. AORUS is a premium gaming brand focused on customization and personalization for all users but most importantly gamers. Whether for an enthusiast, power-user, or a casual gamer, the AORUS motherboard is the perfect board for them.

“Personalization and customization is something we know our customers want, we recognize that because of all the different case mods we see using GIGABYTE motherboards, Not only does this ideal stay true to GIGABYTE, but also with the AORUS brand, that is why we continually strive to make products that push the envelope—satisfying the consumers demand.” said Henry Kao, Vice President of GIGABYTE’s Motherboard Business Unit.

Exclusively on the Z270X-Gaming 9 and Z270X-Gaming 8 GIGABYTE has included integrated liquid cooling blocks. These water blocks, G-Chill and G-Frost from Bits power and EK Water blocks, respectively, can support both passive and active cooling. These AORUS Gaming Motherboards are ready for gamers to push the limits in performance especially with over clocking.

RGB Fusion – Lighting Your System the Way You Want

Express yourself with AORUS’ RGB Fusion, a totally redesigned lighting system that will allow users to customize their system lights the way they want. With support for RGBW LED light strips, the AORUS Gaming Motherboards have millions of colors and combinations to choose from, making every system as unique as its owner. In addition to the white LED support on the LED pin headers, users can modify multiple sections and zones on their motherboards giving their system even more personality. Selected models even have an Accent LED Overlay that can be swapped based on personal preference.

Smart Fan 5 – The Smart Way to Do Fan Control

Airflow is one of the most important elements of any PC and with Smart Fan 5 users and gamers alike can have full control of their system’s fans. With all fan headers now acting as Hybrid Fan Headers, DIY users do not need to confuse themselves as to which header does what, as all pin headers can automatically detect what type of device is connected. To further support the various cooling options now available to users today specific fan headers support up to 2A of power for larger power hungry fans or pumps.

Since space within a chassis is limited AORUS’ Smart Fan 5 takes advantage of its powerful software to allow users to set fans to respond to thermal sources other than the factory default settings. With interchangeable thermal sensors cooling can be a breeze; select motherboards offer two additional thermostats to keep other components cool within the system.

Microservices-Enabling Faster and Agile Development of an E-Commerce Platform

Running The Data Warhorse In the Business Track

2020 To Be A Trendsetting Year For The SaaS Industry

Baseline IT Transformation in Digital Era