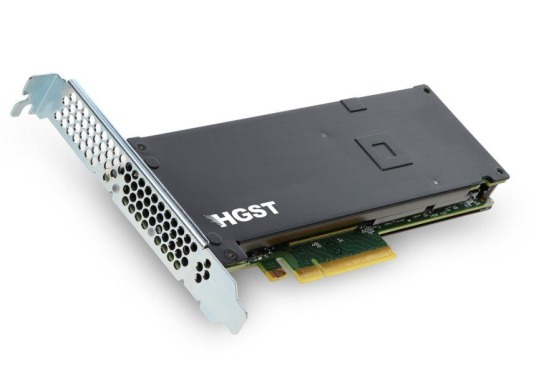 The SSD demonstration utilizes a PCIe interface and delivers three million random read IOs per second of 512 Bytes each when operating in a queued environment and a random read access latency of 1.5 microseconds (us) in non-queued settings, delivering results that cannot be achieved with existing SSD architectures and NAND Flash memories. This performance is orders of magnitude faster than existing Flash based SSDs, resulting in a new class of block storage devices.

“The PCM SSD demonstration is a great example for how HGST sets the pace of the rapidly evolving storage industry,” said Steve Campbell, chief technology officer, HGST. “This technology is the result of several years of research and advanced development aimed at delivering new levels of acceleration for enterprise applications. The combination of HGST’s low-latency interface protocol and next-generation non-volatile memories delivers unprecedented performance, and creates exciting opportunities for new software and system architectures that HGST is exploring with our customers and industry partners.”

Applications for Future Non-Volatile Memory in SSDs : The memory used in this SSD consists of Phase Change Memory (PCM) components with a capacity of 1Gb. PCM is one of several new classes of high-density, non-volatile memories that exhibit dramatically faster read access times when compared to NAND Flash memory.

In order to fully expose the capabilities of these new memory technologies to the server system and its software applications, HGST has also developed a low-latency interface architecture that is fully optimized for performance and is agnostic to the specific underlying memory technology. HGST used its controller expertise to integrate the 45 nm 1Gb PCM chips to build a prototype full height, full length PCIe Gen 2x4 SSD card.

To achieve latencies close to 1us, HGST devised, in conjunction with researchers at the University of California, San Diego, a new communication protocol. This new interface protocol was introduced earlier this year at the 2014 Use nix conference on File and Storage Technologies (FAST).

A New Class of Storage : “Three million IOPs is exceptional, but that is not the most exciting part of the demonstration,” said Dr. Zvonimir Bandic, manager of Storage Architecture at HGST Research.  “What is really exciting is to be able to deliver latencies close to 1us for small block random reads. This is something that just cannot be done with NAND Flash and current controller and interface technologies.”

The most dramatic advantage these emerging NVMs have over NAND flash is that their read latency is shorter by more than two orders of magnitude.  In order to harness this intrinsic advantage, new controller and interface technologies are needed. Current state-of-the-art NVMe protocol is not a problem in the context of NAND Flash but will be inadequate for these emerging NVM technologies that will introduce a new class of storage into the data center ecosystem.

The Three Dimensions Of Digital Transformation

The Untapped Potential of Analytics in the BFSI segment

Advantages and Limitations of Mobile ERP