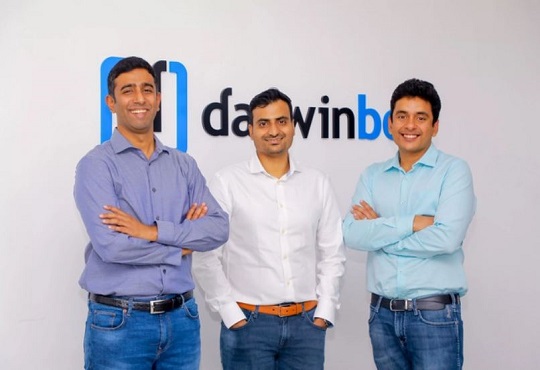 Enterprise software startup Darwinbox said on January 25 that it has raised $72 million led by TCV at a valuation of over $1 billion, giving it the coveted unicorn tag even as listed technology stocks took a beating over the last few days.

Unicorns are private firms valued at over a billion dollars. Darwinbox, founded by Jayant Paleti, Rohit Chennamaneni and Chaitanya Peddi in 2015, works in the HR-tech space, digitising functions such as attendance, payroll and employee onboarding. Its other investors include Sequoia, Lightspeed India and Salesforce Ventures.

Darwinbox's Annual Recurring Revenue (ARR) has doubled to about $30 million year-on-year, said a person aware of the matter requesting anonymity, but the company declined to comment. It is also one of the only Indian software unicorns whose revenue is mainly from India and not the US. Its valuation, at over 30 times revenue, represents the upper end of software valuations, signalling investor aggression although global software stocks, including newly listed Freshworks have fallen recently.

"Even if valuation multiples are high, we will comfortably grow into it with half the money we have raised. So the market isn't that worrying. The focus is to become the market leader in India in 18 months, and SouthEast Asia and the Middle East after that. Then an IPO is next step," co-founder Rohit Chennamaneni said in an interview.

"People laughed at us when we said that we are going after a market where (giants) SAP and Oracle dominate. But Asia's time to buy SaaS has come, and the big opportunity is to move from on-premise systems to the cloud. Today the US is an option in addition to everything else, not the centre of our plans (unlike most other SaaS companies)," he added.

Darwinbox's customers include conglomerates such as Adani, Vedanta and JSW as well as newer internet companies such as Cars24, Vedantu and CRED.

Similar to other technology companies, Darwinbox also benefitted from the COVID-19 pandemic, which turbocharged digital adoption across sectors, and brought millions of new users to the market from industries such as real estate, manufacturing and healthcare (hospitals).

Darwinbox's customers grew from 500 to 650 in the past year, and notably, the new 150 customers brought in as much revenue as the original 500 did.  "Our deal sizes have gone up, and in the last one year we have also made an effort to upsell to existing clients-- increasing their usage for more functions. As companies hire more, our usage also goes up," Chennamaneni said.

It also has a Net Dollar Retention Rate (NRR) of 115 percent- a key metric that indicates how much it can grow if it doesn't add new customers. Freshworks had an NRR of 112 percent leading up to its bumper IPO.

Outside India, Darwinbox also hired local people, helping software adoption increase. "They almost view it as a local product there because we have local teams," he said.

It further plans to build technology to integrate with other functions built by other companies-- insurance for instance, where Darwinbox can be used to adjust insurance depending on an employee's seniority.

SaaS companies including Darwinbox, despite growing rapidly, are struggling to retain talent, however, due to employees feeling lonely and disconnected because of working from home, and the chance to earn record salaries is easier than ever before due to the funding boom.

Chennamaneni said he is trying to counter this by hiring from colleges, rather than experienced professionals, and training them. Rather than hiring a function head followed by her team, he is looking to hire and groom a young person to become a leader instead.

Is Your ERP Ready for the IIOT Challenge?