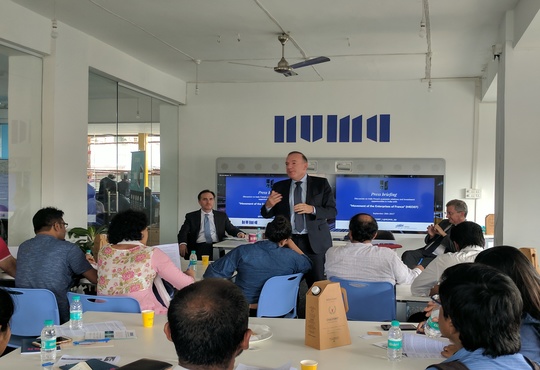 The Mouvement des Entreprises de France (MEDEF), or the "Movement of the Enterprises of France" has announced today their intention to strengthen trade ties between France and India, on their official visit to Bangalore, India. Led by Pierre Gattaz, President, MEDEF, the 60-member delegation comprising of SMEs and some of the leading corporations of France visited NUMA Bengaluru, a French startup accelerator, to discuss investment opportunities between the two countries. MEDEF is the largest employer federation of France representing over 800,000 member companies advocating for the interest of large, medium and small enterprises at the local, regional, national and EU levels.

Historically, India and France have been trade allies with strong ties in defence, space, nuclear energy and smart cities. The delegation visited India on a three-city tour of New Delhi, Mumbai and Bangalore to meet various central and state ministries, industry bodies - FICCI, CII, large companies such as Michelin, CapGemini, Larsen & Toubro and leaders in innovation including Team Indus, amongst others. The aim of the delegation is to initiate talks between both countries to fillip both economies, with special interest in the government’s “Make in India” initiative.

Commenting on his visit, Pierre Gattaz, President, MEDEF said, “France and India have held strong trade ties under our respective state leaders for more than two decades. During this visit, we have held many discussions with the private sector and with our Indian counterparts in the government and industry to source viable opportunities for both our nations to participate in each other’s progress. India’s ingenuity and technology prowess is a cornerstone of its economy. With decades of bilateral cooperation, we have built a strong foundation of mutual trust and commitment towards each other’s development.”

“We have gathered immense data and researched untapped sectors, which we intend to recommend to our ministry and industry that will create an even more robust ecosystem than before. We thank NUMA Bengaluru for hosting us in this great city and providing their resources to facilitate a meaningful engagement. We are confident that President Macron’s visit later this year, will cement the partnership and improve the bilateral and trade ties of our great democracies,” he added.

MEDEF held this press briefing at NUMA Bengaluru- the leading European hub for innovation and entrepreneurship, world-renowned for startup acceleration and innovation hubs, having made its presence felt in eight cities (Paris, Moscow, Casablanca, Bengaluru, Barcelona, Mexico, Berlin and New York).  Currently in its third year of operations in India and with more than 17 years of entrepreneurship and innovation experience globally, NUMA operates mainly on 3 different verticals; Startup Acceleration, Corporate Innovation, and Community & Events.

3 Essentials of Digital Video: or the Long, Short (and Silent) Off it!

Adoption of Technology by Libraries

How Technology, Budget and Culture Collide Behind IP Transition