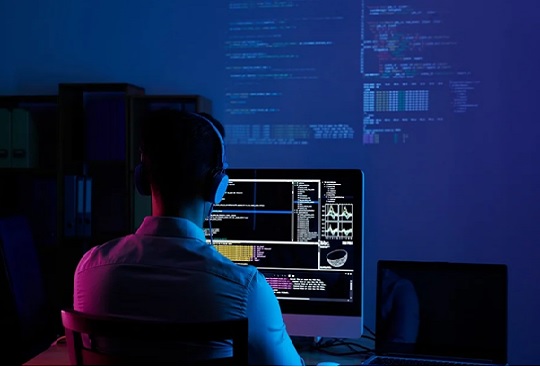 Simultaneous localization and mapping (SLAM) is a task in robotics, computer vision, and machine learning research. SLAM means the robot uses its sensors to build a map of an environment while simultaneously keeping track of its location within that map. If you are unsure what this means, think about a human taking a walk around the neighborhood at night. When you return home after your walk, you likely have a sense that not only did you get back from taking that particular walk but also from that general area. You would have been able to tell which routes you took based on the path it follows concerning your house. Mapmaking is a skill that humans possess that many robotic systems lack. Robots need to build maps of their surroundings, especially when navigating through unfamiliar areas or new environments.

How does it work?

SLAM works by using a computer-generated model that represents your surroundings. This model can be based on anything from images of vast open fields to panoramic photographs of your room. The model's size depends on how much time you have to process it. One of the challenges with SLAM is so many different types of environments. One method is to create models based on what your smartphone could theoretically "see." Another method is to teach cameras with 3D lenses to understand the world around them.

There are also other approaches, such as using a computer program that can process images at a rapid rate through machine learning. That can allow for extremely accurate localization of where you are and distance measurements without having to pre-process data ahead of time. The result is a real-time environment map that can be easily stored and processed over time. It's one of the reasons why SLAM has become so popular with autonomous vehicles and robots.

How do you do SLAM?

SLAM is done using a Markov Random Field (MRF) algorithm, which allows the robot to find its current location using only information from its sensors and the map previously built by itself. The key difference between SLAM and other deep learning methods like Convolutional Neural Networks (CNNs) or Recurrent Neural Networks (RNNs) is their ability to learn a mapping function, or what we call SLAM here you have probably heard of it already. The difference between a CNN, RNN and a SLAM is that a CNN and RNN learn to recognize patterns while a SLAM learns to build a mapping function.

To teach the robot how to build a mapping function and recover its location concerning that map, you need two different things: trajectory data of the robot's movements and sensor readings taken during those movements. Combining both forms the training data for our Simultaneous localization and mapping algorithm. There are many ways to get our robot's trajectory data depending on your robotic system. For the simplest setup, a common way is to use the robot's gyro sensor, which measures its angular velocity in both the horizontal and vertical axes. For more advanced robotic systems, like those that are mobile, we generally integrate a magnetometer into our robot to get both orientational and angular velocity data at all times.

Here are some of the benefits of adding a SLAM feature to your next device.

With so many sensors involved, you will have a much more accurate position than with just GPS alone. For example, if GPS says you are right at a storefront and you walk up to it, the SLAM system will pick that up and know for sure that you are at that place. That means your app will have much better accuracy and less confusion.

The SLAM system can detect the 3D position of objects in real-time, meaning it can tell if there is a table on the other side of an invisible wall. That allows your app to prepare for these situations in advance, so nothing unexpected happens when using it.

When using GPS alone, navigation can become confusing when aiming toward an exact location. The SLAM system will combine the position data from any available sensors, enhance it with environmental information and give you a much more accurate path toward your destination.

The SLAM system can also create a 3D map of an environment, and this is not just something idle. You could use it to detect an object in a certain spot and use the generated 3D model to place other objects there. For example, if you're building a game with augmented reality (AR) features, you could add a virtual door on the wall in AR that looks exactly like the real opening. Your virtual character would first approach the real door, enter, and then walk through the fake one in AR mode. This new feature can open up a lot of possibilities with your app.

What are the major applications of SLAM?

Google Maps is probably the best-known application of SLAM. In particular, it is used for mapping and navigation, creating waypoints and geo-fences, and it also has a feature that allows users to share their positions with friends and family. This technology is most widely used in urban and traffic environments, but only recently has it made its way into agriculture. For instance, farmers can use the SLAM-based trajectory prediction system to decide on optimal seeds placement in their fields according to the particular needs of their crops at that moment in time - something that would be nearly impossible without this technology!

GPS systems in cars are another widely successful application of SLAM GPS systems are used to track individual cars' path and guide them towards their destination. It helps drivers find specific places, like gas stations and restaurants and advises them on getting there. However, some experts warn that GPS systems can be fooled in tricky urban environments or drive in an unknown area. Although some GPS systems have incorporated the information provided by Google Maps into the mix, other SLAM-based apps are commonly used for navigating unknown areas.

Smartphone navigation apps are a more recent use of this technology and have become hugely popular over the last decade. These apps allow users to navigate their way anywhere in the world without actually having a GPS or map of the area. Smartphone navigation apps draw information from the Internet and combine it with other data to create a virtual map of the area, including points of interest like restaurants and hotels along their path.

Drone flight planning software is yet another great use for this technology. Some companies have developed systems that allow users to plan their trips with the help of a software program that considers all of their available information - including past flight plans, wind direction and speed, GPS data, and a SLAM map of the area. It finds the safest and most efficient route possible so that users can have an optimal flying experience. The maps used in these programs are very similar to the ones used by Google Maps.

Several industries are rapidly adopting SLAM technology for different purposes, including agriculture, robotics development, urban mapping and navigation, and even military use.

Information Management System: Why is it Necessary for Business Growth?