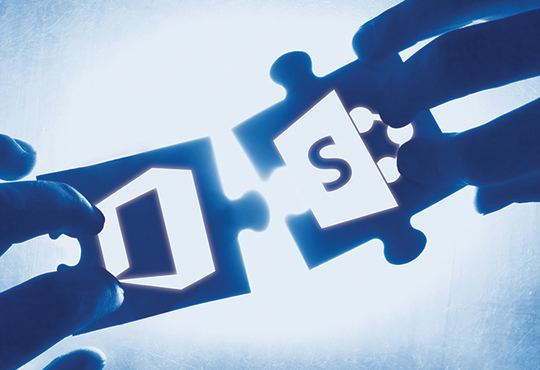 Microsoft provided updated roadmap information for both its SharePoint and OneDrive for Business products this week.

Mark Kashman, a senior product manager on Microsoft's SharePoint team, provided the details. He recapped some items from Microsoft's Ignite conference discussions in September and delivered some additional news. His keynote talk on Wednesday, "SharePoint and OneDrive -- Reinventing Content Collaboration," was part of the Collab365 series ongoing this week.

In general, Microsoft is working on four areas to "reinvent" productivity with SharePoint, namely "collaboration, mobility, intelligence and trust," Kashman said. He added that "holistically, our approach is to enable you to intelligently discover, share and collaborate on content from anywhere and on any device."

Roadmap Progress
Most of what was announced at Ignite regarding SharePoint developments is currently at the preview or full-release stage, Kashman said.

The Team News feature for SharePoint, announced at Ignite, is now at the "first release" test stage. It has rolled out to 10 percent of Microsoft's first-release participants, Kashman said. Users create Team News in a Team Site and its content can be consumed in a browser. The Team News feature is also coming to mobile phone applications. It'll arrive in an update to the iOS app first before getting implemented in the other mobile operating system platforms. It will have the ability to consume all of the News from across different Team Sites, based on user activity or machine learning, Kashman said.

The Intelligent People Cards feature has been released and is now in SharePoint Document Libraries and Lists. It's accessible through the Outlook Web App, SharePoint Online and OneDrive for Business. It uses Microsoft Graph search technology to show content and what people are working on.

For the overall SharePoint roadmap, see this slide presented by Kashman at the end of his talk:

Prospects
Still to come sometime this quarter, according to the slide, are feed-back driven updates, next-gen sync for Team Sites, fast Site creation and the worldwide release of the SharePoint Framework for developers.

Kashman offered a thumbnail sketch of what's expected to arrive in the first half of 2017, including user interface improvements, app integration capabilities, and further integration with Graph technology and Office 365 Groups.

"What we are announcing coming in the early part of next year is the way to build more modern and broadcast-type Publishing Sites, not just Pages," Kashman said. "And, of course, with business applications, we're working with the PowerApps team and the Flow team to build rich solutions that you can do as an end user without relying on deep development. We have things like the SharePoint Framework that we're working on so that if you have higher end customizations to build into your solutions, you can. And we're starting with Web Parts and building from there to build out a richer set of custom pages, and of course beyond that looking into the portal space. Again, looking with the Graph and Office 365 Groups, those things are bringing together everything we do in SharePoint now."

Kashman also pointed to native mobile SharePoint apps for Android, iOS and Windows. SharePoint Pages "are now responsively designed" to work with mobile apps. He added that "you'll be able to access content on-the-go no matter what device you're on."

He also referred to the "SharePoint intranet in the pocket" mobile capability. Microsoft will have apps coming for all platforms that will enable users to navigate Sites, Portals, Document Libraries and Lists, as well as the ability to contact people. It will be possible to find content from anywhere across the intranet through the app. Users will see Site activities, including what's been modified and added, Kashman said.

Sign-on capabilities for mobile apps across SharePoint Online and SharePoint Server also are getting enabled.

OneDrive for Business now has a new People Card and Discover Tab, Kashman said. He claimed that the next-generation sync client is getting better at syncing OneDrive for Business files, although he admitted that Microsoft's sync efforts had "a rough start a couple of years ago."

At Ignite, Microsoft announced that it will be possible to sync SharePoint Online sites and Document Libraries by end of year. In addition, sync will be able to address SharePoint on premises further on down the line, Kashman said.

Server and Hybrid
Kashman reminded his audience that Microsoft plans to release Feature Pack 1 for SharePoint Server on premises sometime in November. It will bring some features developed for SharePoint Online and Office 365 to premises-based SharePoint environments. Kashman said that Feature Pack 1 will bring a new user interface for OneDrive and a custom App Launcher. It also will support more hybrid capabilities, such as unified auditing and taxonomy capabilities. It will add IT admin controls and some of the new developer capabilities around SharePoint Framework, he added.

Organizations will be able to create custom tiles and control how the App Launcher appears. Feature Pack 1 also will enable smaller server farm configurations when running the MinRole option.

On the hybrid side, Microsoft is previewing a Hybrid Auditing feature. It'll permit a broader hybrid search across all content, including SharePoint and Exchange Online. It can perform a true audit search across all of your domains, Kashman claimed, so that organizations can hand off the reports.

A unified taxonomy capability is at the preview stage. It includes terms, term sets and groups. The local terms stay local. Organizations can control which term groups get shared between SharePoint Server on premises and SharePoint Online, Kashman said.

Another feature coming for hybrid SharePoint environments is Administrative Actions Logging, although it didn't get much of an explanation during the talk. Update 10/25: Microsoft MVP Trevor Seward explained in a Reddit AMA session today that Administrative Actions Logging is for SharePoint Server premises-based environments only, not for hybrid environments. It will arrive in the November Feature Pack 1 release and will let users find out who did what on a SharePoint farm. He explained how it works in this October blog post.

4 Must Have IT Security Skillsets To Counter Nextgen Cyber Threats

The Next Wave In Software Engineering After CMM

Bill Curtis, SVP & Chief Scientist of CAST & Director of the Consortium for IT Software Quality (CISQ)

Digitization of Business Processes Drives Change in IT

Dual Mode of IT