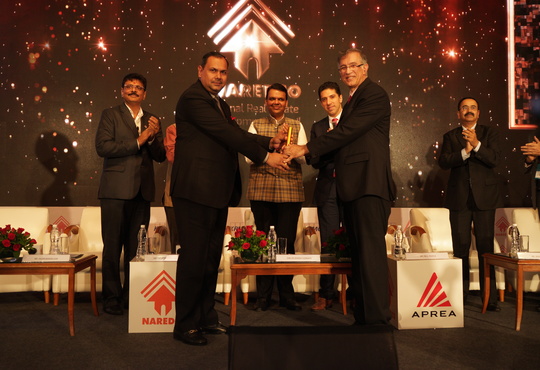 Dr Niranjan Hiranandani, Founder-Chairman of Hiranandani Group and CMD, Hiranandani Communities has moved on to taking over as the newly elected National President, NAREDCO. These are challenging times for the industry which is coming to terms with working in a new regulatory regime. I am overwhelmed by the trust and confidence reposed in me by NAREDCO, and shall strive to ensure we fulfill the aims and objectives of NAREDCO,” he said.

Given that NAREDCO strives to be the collective force influencing and shaping the real estate industry, Dr Niranjan Hiranandani said he seeks to ensure it remains the leading advocate of developing standards for efficient, effective, and ethical real estate business practices, valued by all stakeholders of real estate sector and viewed by them as crucial to their success. “As National President, NAREDCO, I will ensure we all work together as a team, to create and sustain an environment conducive to the growth of real estate industry in India through the public-private partnership (PPP) route,” said Dr Niranjan Hiranandani post-Union minister of state with independent ministry of Housing and Urban Affairs announced Mr Hardeep Singh Puri announced new PPP plocy to promote private investments in affordable housing.This will allow central extending additional assistance of upto Rs 2.50 lakh per each house to be built by private builders even on private lands in urban areas.

“The new paradigm reforms, is something that will enable achievements which will boost Indian Real Estate. “Given that it is one of major contributor to India’s economic growth and we would like to ensure it contributes more in years to come, under the new regulatory regime. Real estate should remain labour intensive, so that it continues to generate skilled as also unskilled employment, as also supports growth in 267 related and intermediary industries like steel, cement, floor cladding, furnishing etc, to ensure further growth,” he added.

On challenges facing the industry at the national level, Dr Niranjan Hiranandani said he would work to rewrite the success story of real estate. “NAREDCO will work to help redefine the parameters of Indian Real Estate, given the transformation and reformatory steps taken by the Narendra Modi Government. I believe in the ambitious vision of ‘Housing for All by 2022’ and will work towards ensuring that NAREDCO provides support and aligns with this mission,” he said, adding that his focus would be on ensuring a better scenario for all stakeholders as also encouraging cohesively work between developers, bureaucrats and the Government.

The focus as new National President, NAREDCO will include rationalizing processes so that permissions and clearances for projects are received within set timelines, to improve business viability in light of high land cost, to build capabilities for delivery of projects on time as also focus on more green building projects.

In conclusion, Dr Niranjan Hiranandani said he wants to work towards ensuring that the real estate industry can hold its head high, and proclaim that ‘we are the builders of this nation”.

Combining Technologies With The Internet Of Everything

Digital Transformation - A New Necessity for the Customer Experience