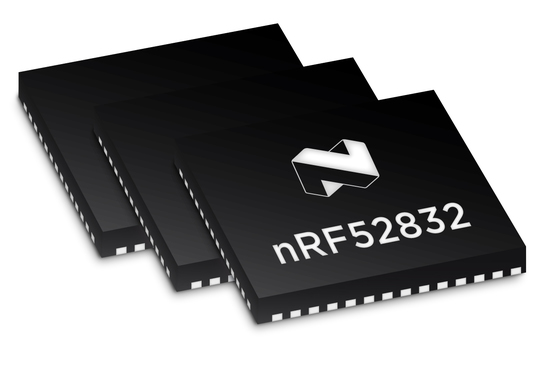 Nordic Semiconductor announced that the first nRF52832 member of its latest nRF52 Series Systems-on-Chip (SoCs) – the most advanced Bluetooth® Smart single-chip available on the market today – is now entering mass production and includes a range of new, previously unannounced features.

The mass production version of the nRF52832 is certified to the latest Bluetooth v4.2 of the Bluetooth specification and the Bluetooth software stack includes a new ‘LE Secure Connections’ capability that supports encrypted wireless communications. Device Firmware Upgrade (DFU) security has also been further enhanced. In addition, there is a new flexible RAM scheme that allows developers to optimize how much memory is used by the software stack for any given configuration, and also concurrent multi Master-Slave network support. The latter feature allows, for example, a device such as smartwatch to act as both a hub to other wireless sensors and as a wireless peripheral to a smartphone at the same time.

As previously announced, no competing solution comes near to offering the nRF52832’s combination of features and performance that marry barrier-breaking performance to power efficiency, offer new levels of design flexibility, and include a unique on-chip NFC™ tag for consumer-friendly Touch-to-Pair.

In summary, the nRF52832 features a category-first 64MHz ARM Cortex-M4F processor, a best-in-class ultra high performance, low power 2.4GHz multi-protocol radio, and fully automatic power optimization. Achieving a EEMBC 215 CoreMark the nRF52832 delivers up to 60% more generic processing power than competing solutions and thanks to its ARM Cortex-M4F up to an additional 10X the Floating Point and 2X the DSP performance. And at 58 CoreMark/mA the nRF52832 is up to 2X as power efficient as competing solutions as well.

“As such the nRF52832 re-defined the Bluetooth Smart single-chip category when it was announced in June last year and no competitor has launched anything to match it since,” comments Nordic Product Marketing Manager, Pär Håkansson.

“Demand for the nRF52832 has also outstripped all previous new product launch records for Nordic Semiconductor. This was helped by the successful completion of our biggest and most well-attended Global Tech Tour to date [where Nordic takes its top internal engineers on the road to meet customers new and old, introduce the latest developments in Nordic’s ULP wireless technology, and train customers hands-on in how to use it]. This reached over 4000 engineers and developers around the world. As such production of the nRF52832 will ramp from sampling volumes to millions of units over the next quarter to ensure there is ample allocation for all customers who are now encouraged to place their first orders via their local Nordic distributor.”

“Current single-chip Bluetooth Smart solutions are struggling to keep up with the rate of innovation in Bluetooth Smart – the fastest growing wireless market in history – particularly in applications such as wearables and IoT,” adds Kjetil Holstad, Product Manager for Bluetooth Smart at Nordic Semiconductor. “The main reason being that until now greater performance could only be achieved at the expense of power efficiency.”

Holstad continues: “The nRF52 Series uniquely merges barrier-breaking performance and power efficiency together on a Bluetooth Smart single chip for the first time and is the single chip the Bluetooth Smart market is crying out for. We hope it will free and inspire developers to be even more creative when developing Bluetooth Smart products and applications and to in-turn re-define what’s possible to do with Bluetooth Smart wireless technology.”

Design as a Service: Done Right

Cyber Security: One Of The Most Important Infrastructures In A Company

Higher Education in the Cloud - Transformation in Motion