One in ten of India's internet population is a Hyperconnected Consumer: GfK 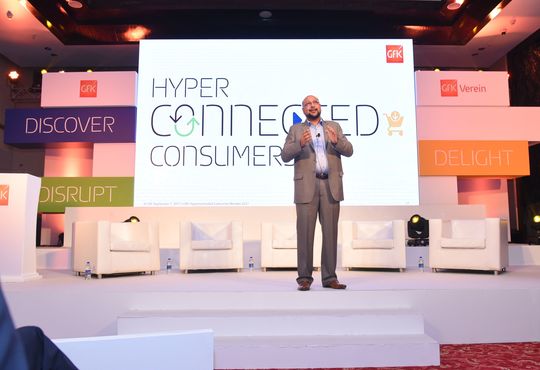 Improving internet infrastructure across India, rising ownership of smartphones, and ubiquitous of its usage has made the mobile device the gateway of choice for the internet. A recent GfK study, focused on the top users of the country’s internet population, the hyperconnected consumers, is defined as someone who owns a smartphone, at least one other connected device, accesses the internet daily with, and spends more than four hours daily on the smartphone.

There are around 41 million hyperconnected consumers in India, with major cities like Delhi and Mumbai reporting the highest concentration of consumers belonging in this segment. According to the Hyperconnected Consumer study in India, they spend almost six hours daily online—double the amount of time compared to the average consumer. Prime time for them is 9pm to 12 midnight: the hyperconnected consumers have the most intense usage on their smartphone during the traditional media opportunity window.

“This study has uncovered an emerging category of connected consumer who is embracing and actively opting for digital modes of lifestyle,” highlighted Nikhil Mathur, Managing Director for South Asia at GfK. “This evolution of the ‘hyper’ segment takes consumers’ connectivity level up by a notch, proving that digitization is indeed taking place at a rapid pace, with smartphones being instrumental in the process.”

Hyperconnected consumers spend more than half (61%) of their total time using smartphone for communication and social networking. WhatsApp and Facebook together account for 54 percent of the time spent on the smartphones. Compared to the average consumer, hyperconnected consumers access Instagram thrice as much, use taxi apps more often (1.3 times), and downloaded 6 more apps to total 16 new apps in the last month.

“With the number of internet users in India expected to cross 450 million by June, the usage of smartphone for high social activity goes beyond simple networking and has evolved into a perpetually connected, digital-led lifestyle,” said Karthik Venkatakrishnan, Regional Director for Digital Market Intelligence, GfK.

The frequency of engaging with brands online is also higher for this group of consumers. Four in five (80%) like or follow a brand on Facebook while two-third (65%) forward brand content to others, showcasing that they have some level of engagement with at least one brand on social media. In particular, hyperconnected consumers tend to search for coupons/vouchers from a particular brand nearly twice as much as the average consumer.

“These valuable insights can help brands targeting the Indian market to rethink their strategy, such that they can seamlessly integrate their offline and online offerings in the consumer purchase journey in order to be ready for them when and where they are wanted the most,” commented Mathur. “Digital India will continue to spur the growth of hyperconnectivity with the plethora of opportunities it brings to the table. It is even more imperative for companies to have an in-depth understanding of how to deal with today’s hyperconnected consumer and make the best use of it,” he concluded.

Why Offensive Countermeasures Weaken Our Cybersecurity

It is not management of end users' devices that matters,but the empowerment of its users

Enhanced role of Technology in the Financial Services Sector

How is IOT emerging as next technology mega trend to transform our future?