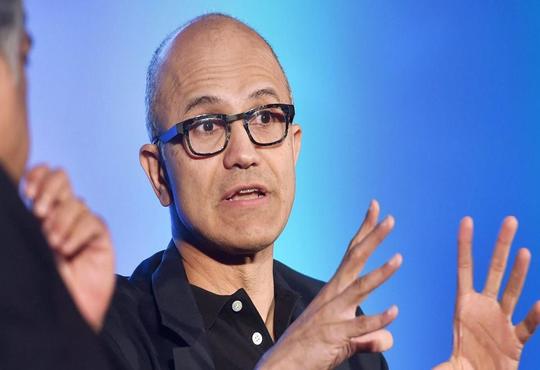 Microsoft CEO Satya Nadella was on his maiden official visit to Bengaluru on Monday where he participated in a discussion organised by Microsoft on the cloud-first, mobile-first world. The India-born Chief was joined by Infosys Co-Founder and former UIDAI Chairman, Nandan Nilekani and the interaction between the two most inventive minds of the IT industry focused on the changes happening in today’s technology driven world and how artificial intelligence and augmented reality will be a pivotal driving force in the years to come.

Noting Nilekani’s work with the AADHAR, Infosys and other projects, Nadella lauded the UID design and the concept of India Stack, stating that the platform brings wide-ranging possibilities for start-ups to build customer-centric products.

We were very fortunate that two different governments, of very different political persuasion, both supported the project and it has really accelerated, crossing a billion users in about 5 years,” Nilekani replied. We actually thought, how do we layer APIs on it. The initial APIs were for authentication, and then we built a KYC capability to open a bank account/SIM card, and a great example is what Mukesh Ambani has done at Reliance Jio. It was possible only because of AADHAR eKYC, so it's actually a source of competitive advantage. The same technology has saved the government about $5 million by reducing waste."

The conversation then moved to AI and Machine Learning, which Nadella believes to be the third runtime. The first was the OS followed by the browser, and the third runtime can actually be the agent," he said. "It knows you, it knows your work context and your world. That's how we are building Cortana to give it a natural language understanding."

Nadella believes that the widespread availability of cloud infrastructure has made AI a viable prospect today. "With AI, on a human level we can now do human speech recognition, image recognition, and it's because of the fact that you have the cloud which offers infinite computing capacity and that combined with improvements in algorithms, has really pushed things forward," said Nadella.

Also excited about the prospects of Augmented Reality, Nadella remarked, “Augmented reality is perhaps the ultimate computer and the difference between AR and VR is just a dial of the opacity. The user will be able to decide if they want to see the real world and interactively work, or if they want their full field of vision to be the computer."

Towards the end, the two IT veterans were joined by Flipkart’s CEO Binny Bansal, announcing a strategic partnership between Microsoft and Flipkart. Seeking to expand E-Commerce in India, the collaboration will be the first of its kind, where Flipkart will adopt Microsoft Azure as its exclusive public cloud platform.

“At Microsoft, we aim to empower every Indian and every Indian organization with technology and the key to this is forging strategic partnerships with innovative companies like Flipkart,” said Nadella.

In agreement to this, Binny Bansal added, “Flipkart has always been committed to its vision of transforming commerce in India through technology. Given Microsoft’s strong reputation in cloud computing, coupled with scale and reliability, this partnership allows us to leverage our combined strength and knowledge of technology, e-commerce and markets to make online shopping more relevant and enriching for customers.”