Satya Nadella on Aadhaar, India Stack and the Revolutionary Potential of AI 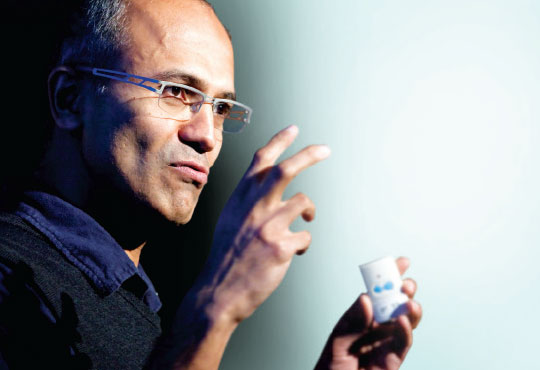 As an open technology platform, Aadhaar opens up a plethora of opportunities for  applications, businesses and technologies to be developed. This very technical architecture has paved way for the conceptualisation of the India Stack. Built on the foundation of the Aadhaar system, India Stack creates an open digital infrastructure for presence-less, paperless and cashless service delivery by combining the modules of e-KYC, eSign, Aadhaar Payments Bridge, Unified Payment Interface and Electronic Consent. As a platform that fuels innovation, it is also expected to bring a much needed boost to the start-up ecosystem and improve the overall economy of the country.

A similar crucial player driving innovation in India is AI. IT/ITes majors within the country such as Infosys, Wipro and TCS have launched their own artificial intelligence platforms to procure the ability to continuously learn from new data, recommend a solution, and predict failures. In addition to the IT sector, a large number of start-ups in India have also created platforms based on artificial intelligence technology, enabling the Indian start-up ecosystem to grow at a spectacular pace. Whether it is in chatbots, predictive analysis, computer vision or visual intelligence platforms, enterprises are developing these capabilities organically, to help India adapt to a machine intelligence-driven economy in the near future.

With these rapidly evolving technologies providing India with limitless possibilities in its digital transformation journey, Microsoft CEO Satya Nadella in his maiden official visit to Bengaluru, joined UIDAI Chairman - Nandan Nilekani and Flipkart CEO - Binny Bansal in an interesting interaction that focused predominantly on the changes in today’s technology-driven world. The trio explored the possibilities brought forth by Aadhaar, India Stack and the role of Artificial Intelligence and Augmented Reality as a pivotal driving force in the years to come.

Satya Nadella:  What according to you are the significant technological changes taking place within the country?

Nandan Nilekani:  I am excited about the technological changes occurring and I wish I was 20 years younger. Presently the advancement can be attributed to the infrastructures built around the Cloud, Artificial Intelligence and growth of mobile phones, among a host of others. Whether it is in the areas of banking, healthcare or education, there now exists greater capabilities which were non-existent before. The government has invested millions in the Aadhaar platform and there are applications built over it.

Nadella: The design of the Aadhaar has been referred to as an hourglass model. Does it make more sense to relate to platforms in this manner?

Nilekani: We were inspired by the Internet and the GPS, both of which were platforms built in the Public. The US Government had invested billions into building these platforms and over the years, they have grown into platforms of innovation. Our original vision while creating the Aadhaar was to build an ideal platform with the same degree of minimalism, that would allow innovation above and below the stem of the hourglass - above in terms of applications and below in terms of devices.

Nilekani: Taking your experience of building technology platforms into account, what new advancements do you anticipate in platforms and how will Microsoft contribute to this growth?

Nadella: Microsoft has always been at the forefront of basic technology infrastructure. Fundamentally, we think of ourselves as a tools and platform company. The idea of creating technology that could serve as an ingredient to create more technology is very natural to us. I would say that there are three broad areas of innovation that I look forward to in the upcoming future. The first area includes Cloud and Artificial Intelligence which complement each other as Cloud offers an infinite capacity of storage and this coupled with its ability to process large volumes of data, is fuelling the AI revolution. We’ve made great advances in speech and have acquired the capability of human level speech recognition. This development has been a combination of both algorithmic work and the capacity of the Cloud. The second area is Cortana which focuses on natural language understanding and the third one is going to be augmented reality. I believe that augmented reality is perhaps the ultimate computer and the difference between AR and VR is just a dial of the opacity. With the emergence of AR, the user will have the choice to decide between a real world interaction and a complete 360 degree immersive field of view.

Nadella: What is your vision for India Stack? How will this take shape in the future, both in terms of the technology and the impact?

Nilekani: One of the aspects we took into account while designing the Aadhaar was the importance of speed and scale. Unless you have the speed and scale, a platform like Aadhaar cannot be implemented. We were very fortunate that two different governments of very different political persuasions, both supported the project and it has really accelerated in the last 3 years, crossing a billion users in about 5 years. We first built APIs for authentication followed by a KYC capability which allows one to open a bank account/SIM card. A great example of the KYC is Mukesh Ambani’s work with Reliance Jio, where a 100 million people have been enrolled into the Jio platform. This can be attributed primarily to the capabilities of AADHAR eKYC. The same technology has been used by the government to effectively reduce wastage while for the private sector; it has been a means of customer acquisition.

We have also designed it to be an electronic signature; wherein a document can be signed using the Aadhaar. Additionally, the government is launching Digital Lockers which allows the storage of encrypted documents on the Azure Cloud. The next big thing that we have worked on building is the Unified Payments Interface, which is the world's first inter-operable mobile to mobile payment network in any country. The final piece of the puzzle will be the electronic consent module. India is going to be data rich and this data can be a source of individual empowerment, provided it is supported by an architecture that would allow a billion people to access their own data with consent. Our fundamental belief is that if all these technologies can be used for empowerment, then they will have massive penetration in the next decade and will be more widely accepted.

Nilekani: As an avid believer in platforms and collaboration, how do you see Microsoft aligning with the India Stack platform to combine the power of both technologies?

Nadella: As technology evolves further, I think one needs to adopt an architectural world view where the platform that you build can serve as an ingredient to build other platforms. I look forward to our platforms of Office365 and Dynamics365, becoming eminent players in the India Stack. Our Cloud growth has also been immense. We hope to build our Cloud infrastructure in a manner so as to provide the security enclave and core infrastructure to entrepreneurs seeking to build for the India Stack.

Nadella: What according to you are the key challenges with respect to privacy and security?

Nilekani: The question to be addressed is where does government infrastructure end and where does private innovation begin. The hourglass architecture is therefore very important because it enables the government to make investments ahead of time. Privacy is now an important concern in India and the Aadhaar bill that has been passed requires stringent privacy measures. I think it is crucial for the government to lay down the technology infrastructure and digital highways to attain the highest standards of security and privacy. A level playing field needs to be created where private enterprises can engage with this infrastructure and create innovation, which is what we’ve built with the India Stack. Government policy, investment in infrastructure, and focus on security and privacy are very important, however we must also recognize the need to unbundle the innovation of a million entrepreneurs.

Nilekani: Having witnessed the entrepreneurial energy in India, how do you plan to engage with entrepreneurs inside the country?

Nadella: The centre of the entrepreneurial energy in India is around the Cloud. This energy level combined with the quality of entrepreneurs and the ideas generated, is fantastic to see. The Indian market is huge and is in the midst of an immense cross sectional impact created by emerging start-ups. These enterprises are building on India Stack using Cloud and other diagnostic applications. There are also world class AI start-ups that are emerging. In the last 12 months alone, we've had over 2000 start-ups using our Cloud. India is one of the places in the world where the entrepreneurial energy is able to scale up after a promising start.

Binny Bansal (Flipkart CEO): How according to you will AI evolve in the next decade and what impact will it have on the lives of individuals?

Nadella: AI and machine learning are being used by Indian start-ups to bring down the costs of delivering healthcare and crop yield and this is a powerful step towards harnessing the power of data. Another exciting domain is the branch of deep neural network which has brought about tremendous advancements in speech and image recognition. Although AI offers wide-ranging applications to solve some real issues, especially in mid skill jobs, we have to be very mindful of the impact of AI on employment. When it comes to Microsoft, I hope that our projects such as LinkedIn Learning and some of the skilling work that we’ve been carrying out in India will assist individuals in acquiring more mid skill jobs.

Nilekani: I am excited by the prospect of transforming a country from a per capita income of 2000 dollars to 20000 dollars, which would be a major transformation. This begins with enhancing the indispensable areas of health, education and finance. The applications of AI and the Cloud can be used to deliver personalised health, education and financial services to a billion people which will be a driving force for the economy. I believe that it is imperative for a country with a low per capita income to use this as a strategic tool to improve the economy while also ensuring increased accessibility to the technology.

A Look at Datacenter Infrastructure Trends for 2017

The Smart OSS/BSS Choice for India

Accelerating Storage Innovation In The Next Data Decade

IoT as an Enabler to Operations and Commercial Strategies

The Move to Analytics, All Things 'Mobile'