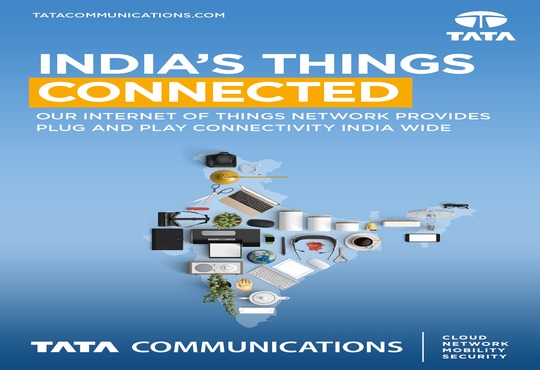 Tata Communications, a leading provider of A New World of Communications™ today announced the launch of a major multi-channel brand campaign in India.Designed to highlight the company’s diverse services portfolio that enables digital transformation for businesses and its contribution to the ‘Make in India’ narrative, the campaign will roll out in December 2016 through to the end of June 2017. The campaign will look to celebrate the company’s customers and partners in India.

Unfolding across India’s busiest airports of Mumbai, Delhi, Bangalore and Pune, and reaching over 100 million travellers, this campaign also includes the sponsorship of major industry and technology events in India as well as an extensive online advertising campaign with leading business publications, generating over 100 million impressions on all its digital channels.

The roll-out of this campaigncoincides with Tata Communications’ 15th year anniversary of a successful public-private partnership, which has seen the company evolve into the country’s business transformation leader, with services across network, mobility, cloud enablement and security.

Julie Woods-Moss, Chief Marketing Officer,Tata Communications, said: “India continues to ascend the global competitiveness index. We are committed to playing a role in nurturing the country’s business potential and enabling outstanding customer value by simplifying digital transformation across industries. Our new brand campaign celebrates the spirit of India and showcases our innovative portfolio of products and services across network, cloud, mobility and security.”

Tata Communications’ portfolio of services is underpinned by the company’s leading global network infrastructure. The company owns and operates the world’s largest and most advanced subsea fibre cable network, including the only wholly-owned fibre ring around the world. This network enables customers and partners to reach 99.7% of the world’s GDP, with connectivity to over 240 countries and territories.

In addition to showcasing Tata Communications’ cloud, network, mobility and security expertise, the new brand platform willserve to build employee pride around the evolution of the company and the role it plays in shaping India. The company was recently recognised by Aon Hewitt as a Top 25 Employer in the country, and ranked by LinkedIn as the 13th most attractive employer in India in the social network’s Top Attractors list.

This campaign builds on the successful campaign in Silicon Valley (2014) and Tata Communications’ ongoing sponsorship of the Heathrow Express in London that started in 2015.

Can AI Speed Up the Supply Chain Process?