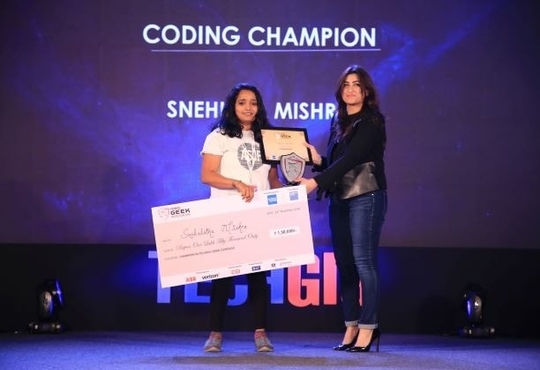 November 28, 2018, Bengaluru – TechGig Geek Goddess, India’s largest coding event for women, culminated in Bengaluru recently. The event saw a massive participation of more than 68,791 women technologists. This mega code competition concluded with a glitzy award ceremony held at The Denhotel where the efforts of all participants were celebrated with thundering applause.

Machine Learning emerged as the most popular theme among participants, hinting at the fact that women programmers are keenly trying out new technologies

Snehlata Mishra was crowned ‘TechGig Geek Goddess2018’ and she took home the winner’s trophy, merit certificate and a cheque of Rs 1,50,000.

TechGig Geek Goddess 2018 marked the fourth edition of the flagship event to celebrate the genius of women programmers in India. This edition was presented by American Express, a globally integrated payments company. Goldman Sachs, a leading global investment bank and active investor in India, was the title sponsor for this edition.

Geek Goddess is hosted by TechGig – India’s leading IT learning platform which has more than 3.2 million technologists onboard. TechGig Geek Goddess 2018 was launched in August when women technologists from all walks of life were invited to share their ideas and codes in different programming languages at the contest. From fresh graduates to senior leaders - women coders from all backgrounds and experience level participated in this edition enthusiastically. Most participants were from Bengaluru, followed by Chennai, Delhi-NCR, Hyderabad, Mumbai, and Pune. In this season C, C++, C#, Java, and Python were among the most preferred programming languages.

The finale day celebrations also marked a Women Disruptors Conference, which saw full house participation from the finalists. This conference saw more than 25 women technology leaders from companies such as IBM, Oracle, Capgemini, Dell IT, Microsoft, Verizon, Juniper, Wipro, ThoughtWorks India, Intuit, PayPal, Accenture and others, exchange their ideas and opinions on diversity and women representation in the IT companies. India’s first specially-abled IAS officer Ira Singhal, and known author Anvita Bajpai too graced the conference. These leaders had gathered to share their success mantras with the aspiring technologists. The winners of TechGig Geek Goddess 2018 were announced after the conference concluded.

TechGig Geek Goddess 2018 Snehlata Mishra recounting her moment of glory said, “I didn’t expect to win at this contest. I just gave it my best shot and I’m extremely happy for winning this title. I must thank TechGig for giving me this opportunity”.

"Each year, with TechGig Geek Goddess, our focus is to bring India’s best women coders to the limelight and give them the best platform to showcase their technical prowess. We also invite leading technology companies to witness this mega coding spectacle where the brightest minds battle it out for the top honors. I am delighted to announce that this year’s TechGig Geek Goddess 2018 surpassed participation levels of all previous editions. The energy and enthusiasm of participants were infectious and I hope this competitive spirit continues throughout their careers. My congratulations to Snehlata Mishra, the winner of this edition of TechGig Geek Goddess, and all the other participants who gave their best shot at the title,” said Ramathreya Krishnamurthi, Business Head, TechGig.

Sharing her thoughts on the incredible response to this year’s Geek Goddess, Ruchika Panesar, Vice President, Global Services Group and Head of Technology, American Express India said, “At American Express, gender equality is a key focus area and our partnerships with events like TechGigGeek Goddess reflect our vision to create an ecosystem that fosters an environment of inclusion. I would like to congratulate TechGig Geek Goddess for emerging as a platform for the industry to foster diversity, minimize gender gap and nurture the talented women in technology”.

“Goldman Sachs is very focused on the advancement of women and diversity in the workplace. Engineering is an area where women remain underrepresented in India, so we are proud to sponsor our country’s largest coding event to celebrate and encourage women programmers.  The tremendous response and participation exemplify to us the continued need to address and develop the talent of our national workforce in this field.  It is our hope that today’s winners and participants will serve as role models for future generations,” said Nitin Shah, Chief Operating Officer for the Technology division at Goldman Sachs in Bengaluru.

Other than the title honor, eight more winners were declared in other categories.

How much does one hour of downtime cost your business?

Digital Disruption - To Drive Next Wave Of Renewable Industry Transformation