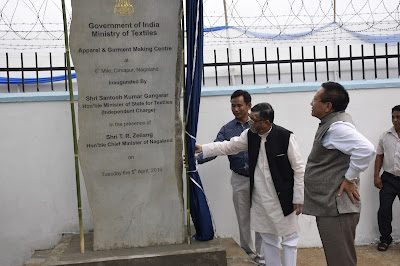 The project for construction of Apparel and Garment Making Centres in North Eastern States is one of the most ambitious projects launched in the textile sector by the Government of India; it has the potential to change the landscape of the textile industry in North Eastern India. I am happy that Nagaland has become a pioneer in this revolution in the region. Hope this will take the textile industry of the state to new heights.

Stating that the Apparel and Garment Making Centre has been operationalized in a record time of a little more than one year, the Minister dedicated the Centre to the people of Nagaland. He appreciated the support rendered by the Government of Nagaland and also thanked the entrepreneurs for coming forward.

The project to construct an Apparel and Garment Making Centre in every state in the North Eastern Region was launched in Nagaland by Hon’ble Prime Minister Shri Narendra Modi on 1st December, 2014. Subsequently, the foundation stone for the Apparel Centre in Dimapur was laid by the Union Textiles Minister on 24th February, 2015.

The Minister said that the purpose of this project is to develop entrepreneurship in apparel manufacturing among the local youth and to provide employment to the people locally in these centers.  He noted that the apparel industry is most rewarding in terms of revenue generation as well as employment in the entire textile value chain.  He said that the apparel centres is a small yet significant step in the direction of increasing export share of apparel and garments in overall export of textiles and clothing. He expressed confidence that the enabling policies and programmes initiated by the Government under the dynamic leadership of the Hon’ble Prime Minister will attract more such investments in the State and  help it to emerge as a hub for apparel and fashion industry.

Viewing sericulture as a high potential area, Shri Gangwar observed that Nagaland can be a forerunner in silk quality and its promotion. The Minister said that in the last two years, the Ministry of Textiles has sanctioned three major sericulture projects to Nagaland, with Government of India support of Rs 101.25 crore. He said that these projects will support silk production in all three varieties of silk i.e  Eri, Muga and Mulberry, from plantation to finished product to marketing. He said that these projects are expected to help about 5000 farmers engaged in plantation of Eri, Muga and mulberry silk and would increase the overall production of quality silk by three times through various interventions.

Pointing out handlooms as a deep-rooted tradition in Nagaland, the Minister said that the unique handloom designs and motifs are expressions of the rich cultural heritage of Nagaland. He added that the Ministry intends to take the cultural heritage beyond the boundaries of the state, by giving international recognition through market linkage, technology upgradation and design inputs.

The Textiles Minister reiterated the Central government’s commitment for overall development of North Eastern Region under the initiative and leadership of Hon’ble Prime Minister Shri Narendra Modi. Shri Gangwar expressed optimism that the inauguration and launching of various projects under the Ministry of Textiles would provide gainful employment to the people of Nagaland.

Nagaland Chief Minister, Shri T.R Zeliang said that the inauguration of the three units would help in skilling Naga youths in becoming professional entrepreneurs. Noting that the Apparel and Garment Making Centre in Dimapur is the first centre in the entire N.E, the Chief Minister expressed confidence that it would go a long way in tapping into the talent of people in the region. He expressed the hope that these Centres would become the breeding ground for many successful entrepreneurs, who could help in uplifting the region’s economy. Shri Zeliang thanked the Central Government for sanctioning the project for establishment of Muga P3 basic seed station and Integrated Eri Silk Development project, as well as the Apparel and Garment Making Centre.

What Do You Mean When You Say 'Digital?'

The New Normal for Enterprise Software