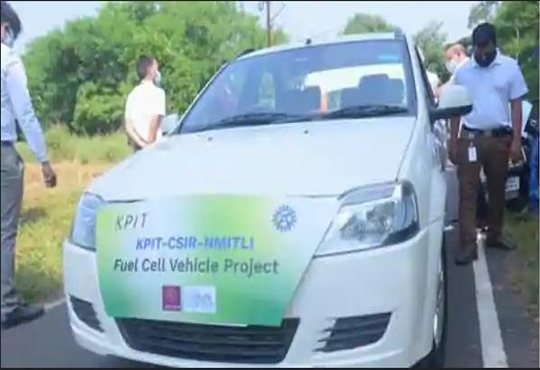 India’s first Hydrogen Fuel Cell (HFC) prototype car that runs on an indigenously developed fuel cell stack at CSIR-Pune (Council of Scientific and Industrial Research) has been tested by the CSIR and KPIT. The trial was successfully completed. Operating at 65-75 degree centigrade, the fuel cell is a low temperature PEM (Proton Exchange Membrane) type fuel cell and is suited best for vehicular applications.

A 10 kWe automotive grade LT-PEMFC fuel cell stack is successfully developed by CSIR and KPI, which is based on CSIR’s know-how. PEM fuel cell technology includes a membrane electrode which is its primary technology, and is entirely CSIR known. Bringing in their expertise in stack engineering, including light-weight metal bipolar plate and a gasket design, balance of plant (BoP) development, system integration, control software and electric powertrain for running the fuel cell vehicle, KPIT showed their expertise.

Moreover, emitting only water, the fuel cell technology reduces the emission of harmful greenhouse gases in addition to other air pollutants.

The trials were conducted on a battery-electric passenger car platform, which is retrofitted with the fuel cell stack. But it is also expected that the technology is highly suited for commercial vehicles like buses and trucks as battery electric buses/trucks require a large battery to accomplish the desired operation range and the HFC technology requires a much smaller battery for a very large operating range. HFC technology gives more promise for the commercial vehicles.

With a Type III commercial hydrogen tank, the FC vehicle is fitted and its capacity is 1.75 kgs of H2 stored at about 350 bar pressure. The FC vehicle is expected to run for approx. 250km range under the typical Indian road conditions at moderate speed. Associated components with power train and the entire fuel cell stack were retrofitted in a standard 5-seater sedan car.

"The technology has a great future and owing to its indigenous development, is expected to be more commercially viable than ever before. It is an important technology that will help India significantly reduce pollution and reduce our fossil fuel imports,” said Ravi Pandit, Chairman, KPIT.

“The time has come for renewable energy based on hydrogen as fuel to power transportation in the country. This will not only reduce the petrol, diesel import bill but hydrogen is the cleanest fuel with water as the only by-product. A long term investment of CSIR under NMITLI in a niche energy area has come to fruition,” said Prof. Ashwini Kumar Nangia, Director, CSIR-NCL.

Are You Ready For A Data Management Makeover?

Why Cloud is the Technology Enabler for Digital Transformation?