Walmart buys 77% of stake in Flipkart at $16 Billion 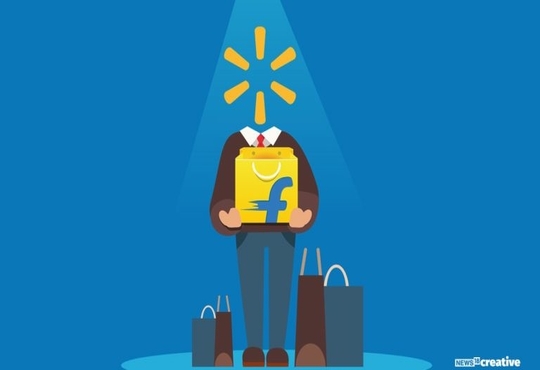 After a long negotiation, India’s largest e-commerce company, Flipkart has decided to sell its 77 percent of company’s stake to US retail giant Walmart at $16 billion which is the largest e-commerce deal in India. At present, the market value of the company is $20 billion. Tech giant Google’s parent company Alphabet Inc is also to do a minor investment in the Flipkart along with Walmart. The Japanese conglomerate and the former biggest investor in Flipkart, SoftBank Group Corp, is also going to sell its 20 percent stake in the company to US Walmart, it will get $4 Billion after the sale. Last year, SoftBank bought 20 percent of Flipkart’s stake at $2.5 Billion. Flipkart’s other investors like New York-based Tiger Global, Accel and South Africa’s Nesper are also going to sell their stakes in Flipkart to Walmart.

The co-founder and chairman of the Flipkart, Sachin Bansal has given his resignation to the company with a farewell post on facebook, he sold all his 5.5 percent of stakes for $1 Billion. “I will be taking some time off and focus on finishing a few personal projects which I haven’t been able to find time for,” he said in his Facebook post.

Recently, the world biggest e-commerce company, Amazon had made an offer to Flipkart to buy 60 percent of stake in the company and to merge Flipkart completely with its Indian branch. It also offered breakup fee of $2 Billion to convince Flipkart to discuss the deal, to which Flipkart refused to comment on.

The Walmart-Flipkart partnership will be beneficial for both the companies. Lately, Walmart has been facing a decline in its sale, but with Flipkart, it can increase its market value in India. Meanwhile, Flipkart will be able to expand its business through the retail store across India. “India is one of the most attractive retail markets in the world, given in its size and growth rate, and our investment is an opportunity to partner with the Flipkart that is leading the transformation of e-commerce in the market,” said by Doug McMillion, Walmart’s president and chief executive officer at the conference.

Flipkart was founded in 2007 by the former Amazon executive Sachin Bansal along with its IITian batch mate Binny Bansal. It started with the selling of books online and handled all the operations from an apartment in Bengaluru. Sachin Bansal has served as the CEO of the Flipkart from 2007 to 2016 whereas Binny Bansal takes care of the logistics operation as a chief operating officer (COO), later he leveled up to Group CEO.

Cloud Is for Everyone