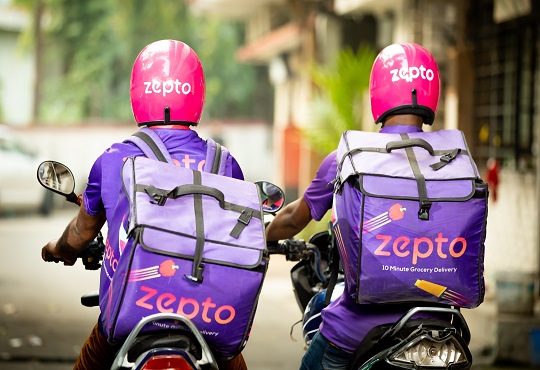 Zepto, a Mumbai-based startup that runs a 10-minute instant grocery delivery service, has more than doubled its valuation to $570 million from $225 million less than two months ago as it expands into newer cities.
Y Combinator’s Continuity Fund led the $100 million Series C round in Zepto, the two said Monday. Glade Brook, Nexus, Breyer Capital, Lachy Groom, Global Founders Capital and Contrary Capital also took part in the round, which brings its to-date secure to $160 million.
The startup, founded by two 19-year-old entrepreneurs who left Stanford last year, came out of stealth mode in November. But long before it began discussion about the business, Zepto had captured immense interest from the local startup community as people began voicing their opinion about the business.
Zepto, whose name playfully uses a mathematical term to explicate the business, offers a 10-minute grocery delivery service, a category that has become red hot in several parts of the world in recent quarters. Heavily-backed players Swiggy and BlinkIt (formerly known as Grofers) have also joined the instant grocery delivery business in recent months.
But neither of them had opted in for this business until Zepto arrived and aggressively began to win customers. Zepto’s arrival in the scene, too, was serendipitous. Aadit Palicha and Kaivalya Vohra had come back to India for a break shortly before the pandemic engulfed the nation.
The teenagers, who previously partnered on a number of projects, consisting of a ride-hailing commute app for school kids, suddenly found themselves locked in their houses in Mumbai. As the pandemic raged, the two struggled to get their grocery supplies even as grocery deliveries, categorized as essential by the local government, was still allowed in much of the nation.
“We felt that the online play of the Indian grocery delivery space, which is one of the world’s largest, was grappling with some gross execution errors,” Palicha stated in an earlier interview.
In an interview last week, Palicha said the startup is overwhelmed with the support and excitement it is seeing from the customers, but it doesn’t want to “become complacent.”
“We are somewhat overly critical of ourselves and hold ourselves to very high standards. People are happy that they are getting their deliveries in 10 minutes or less, but can we continue to focus on scaling our SKUs and improving our unit economics?” he stated. (But at the same time, Zepto is cautious about keeping its employees and delivery partners happy, he said, pointing to the retention and internal feedback.)
Vohra said that its month-on-month purchaser retention is 65% and has set up a network of micro-warehouses, each of which has a capacity to do over 2,500 orders a day.
At stake is India’s e-grocery market that is estimated to be worth $25 billion by 2025, as per a note from Sanford C. Bernstein. “Online grocery penetration is expected to reach ~3-5%, by 2025 from less than 1% today. Long-term structural drivers remain strong: rising income and affluence, lower tier consumption, e- commerce penetration (~30% CAGR) and a young population (~50% below 25). Grocery spend as a proportion of income remains high at ~ 30%,” its analysts wrote.
Zepto today operates in Bangalore, Delhi, Gurgaon, Chennai and Hyderabad, and plans to soon expand to Pune and Kolkata. To ensure instant deliveries, it has set up a maze of over 100 dark stores across these cities that it says are optimized for fast deliveries.
“We are looking at a pretty crazy runrate,” he stated. “In the past one and a half months, we have grown our business by 10 times. And now we are working to grow another 10 times by February or March,” said Palicha.
Another thing moving in the right direction for Zepto is the talent it has been able to attract in recent months. Several high-profile executives from Flipkart, Amazon Uber, Dream 11 and Pharmeasy have joined the startup.
Palicha said one of the reasons why so many executives have joined Zepto is that it has facilitated many who had moved from Mumbai to Bangalore to return to their home city. But the startup’s aggressive growth, disciplined execution, and ambitions have made it attractive for people with similar taste, he said. “We have been able to walk the walk,” he added.
“We are excited to double down and lead this round in Zepto (YC W21). Since Aadit and Kaivalya went through Y Combinator, we have observed that they’re exceptional founders who bring relentless focus and “Doordash-like” execution to the quick commerce model,” stated Anu Hariharan, a partner at Y Combinator, in a statement.
“They originally launched with a different model, swiftly pivoted to quick commerce in August 2021 and are now adding 100,000 new customers every week, 60% of them women. Their attention to detail on the logistics experience is unparalleled and this has enabled them to scale to most major metros in just 5 months. Simply put, we’re confident Zepto will win in this space over the long-term.”

IOT - When Rubber Meets the Road

How to Set Up Guest Internet Access for Guest Satisfaction

Pramod Kulkarni, VP IT, The Ambassador Group of Hotels

Going Hand in Hand with CRM and CEM