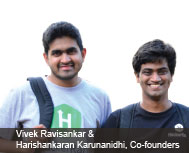 In-house coding tests usually absorb a lot of time for the recruiters as well as applicants. California headquartered HackerRank has helped optimize the procedure through its online assessment and interviewing platform called Hackerrank for Work. Through this platform, HackerRank helps various enterprises recruit the best programmers through challenges designed to test actual coding ability. Companies also get opportunities to use HackerRank for conducting internal coding contests and sponsor coding competitions, known as CodeSprints, to seek best programmers from a pool of a wider audience. Previously known as InterviewStreet, the company was incorporated in 2011 with its Indian arm at Bangalore. The company was founded by Vivek Ravisankar and Harishankaran Karunanidhi, two NIT Trichy alumni, with an aim to help companies hire the best coding talent on offer regardless of any Institute or logistics constraints. The platform enables users to evaluate various skills across all IT domains and a plethora of skills including Android development.

Identifying the Best Programmers
Screening candidates through HackerRank enables companies to save time, money, and effort in identifying the best programmers for enterprises. HackerRank goes beyond resumes and GPAs to get insights into real coding skills, giving enterprises the freedom to create code challenges at any level of difficulty and also other question types such as MCQs, Multiple answer, sentence completion, etc. “HackerRank automatically assesses and scores candidates’ performance on coding challenges at different levels of difficulty ranging from freshers to senior programmers for any desired technical skill set. Companies can also use DroidRank to seek best Android and mobile app developers while SudoRank is used to find top system administrators and Bash script writers,” says Harishankaran. Following the screening test, an interview is conducted through a programming tool known as CodePair. It has an interface that allows recruiters to administer coding challenges in real-time along with the ability to instantly evaluate candidate responses. The built-in audio and video feature enhances CodePair’s capabilities as an overall technical interview solution.“Candidates can compile code live in over 30 programming languages and see the built-in code checker evaluate code in real time, something that a conventional phone interview does not allow them to do,” explains Harishankaran.

Disrupting the way companies approach tech recruiting
HackerRank became the first Indian company to be incubated by Y-Combinator. Following incubation, HackerRank has attracted around USD 12.4 million funding from Series A and B venture capital investments along with an initial funding of USD 200,000. So far the company has catered to over thousand customers and are empowering tech recruiting for firms like Flipkart, Amazon, Adobe, VM Ware, Snapdeal, Target, LinkedIn, Juniper, Walmart Labs, and Citrix among others. HackerRank envisions assisting enterprises to optimize their platform for technical hiring purposes. The company also aims to become an essential part of the programming journey of developers from around the globe, giving recruiters the edge when it comes to hiring top programming professionals. “Our vision is to build a complete skill graph of hackers around the globe by plotting journey of programmers who have built on their coding ability over the years,” concludes Harishankaran.

Testimonial
“HackerRank is making programming interviews very efficient. It's interesting that the problem has been around forever but nobody tried to solve it. The team is responsive to feedback and has gone the extra mile to help us,” says Abhinav Gupta, VP of Rocketfuel.

The Keys to Executing a Business Transformation

Technological Advancement and the Changing Role of CIOs