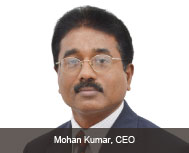 Big Data analytics is supposed to redefine the competitive landscape of various industries in the years to come. In addition, the combination of Big Data analytics and the Internet of Things (IoT) is influencing the marketplaces all over the world. Mohan Kumar, CEO of Bangalore based Trendwise Analytics, says, “The maturity of Indian industry with respect to adoption of big data is not equivalent to that of the global one. However, a lot of Indian companies are looking to explore and know more about big data and how it can help.” The evolution of big data market in India is evident from the fact that major MNCs are setting up big data practices in India. Hence, even though Indian industry is not directly adopting it at a rapid pace, it is helping in the global adoption of big data in a big way.

In a time when most of the big data companies stop at the level of big data software like Hadoop, the need for a holistic big data service remains unsatisfied. Trendwise Analytics meets the expectations of enterprises by offering end-to-end services in this domain. “When somebody wants to initiate a big data project, it is not just about installing Hadoop and working on it, instead the primary objective is to get the data into the big data environment, analyze and visualize the data to build a small application around it. That is where we are different. We do it completely end-to-end,” adds Kumar.

Trendwise is a partner of the top Three commercial distributors of Hadoop - Cloudera, HortonWorks and MapR. It starts with setting up of the Hadoop or big data environment and analyzes the data applying its strong statistical skills in using tools like SAS and R. The company has strong visualization capabilities in areas like Tableau, and it makes sure that whatever has been analyzed, the customer can visualize and play around with it. This end-to-end capability of the company’s analytics solutions sets it apart from its competitors. Trendwise is a one-stop shop for any business that is looking for an analytics solution. The company also helps enterprises set up a big data analytics Center Of Excellence.

In the field of CRM analytics, Trendwise has extensive expertise and it has deployed solutions for retail analytics focusing on the customer analytics side. The company is also looking at video analytics which is customer related. It is building its solution which related to customer analytics. It is being built on IBM’s Bluemix so that it can be taken to the global stage. When it comes to social media analytics, Trendwise is well equipped to analyze twitter data, facebook data, and data in general. To be one step ahead of the other players of this segment, the company has embedded predictive analytics in all of its analytics solutions.

Under the able leadership of Kumar, who has the experience of heading CRM team of SAP Labs and handling big data solutions of IBM, Trendwise has today established itself as a global brand without stepping out of India. The company has been selected by IBM as one of the top 30 companies for their SmartCamp 2014. Over the past three years, Trendwise has gained a strong footing and focusing on business development, the company plans to further expand its business.

Intersection between Big Data and IoT

With Internet of Things (IoT) becoming a big wave, Trendwise is venturing into IoT space, considering the huge intersection between big data and IoT as those devices are going to generate a large amount of data. The company is looking to build applications in this domain. To build its IoT solution, the company is looking at IBM’s platform. Following the launch of a software platform by General Electric called GE for industrial IoT, Trendwise is planning to join hands with General Electric.

Trendwise is playing an important role in spreading awareness about big data. The company provides regular training program for professionals and it has included a three month internship along with the five day program. Secondly, it is running Hadoop MeetUp group in Bangalore which has now 1500 members. The company invites even the people with no prior knowledge to come and there has been a huge positive response. It has also started another initiative which is called Big Data Innovation Lab or BIL whereby it goes and reaches out to the colleges and helps them set up a big data lab. Although the process is driven by the students, Trendwise acts as catalyst in bridging their skills gap.

Five Key Trends In Telecom And Their Impact On Businesses

INTELLIGENT CONNECTED CARE: The Future Of Healthcare In India

2017: Are You Ready for the Fourth Industrial Revolution?

The Role Of Design Thinking In Game Development

Solution Providers Must Cater to Evolving Needs of the Healthcare Industry